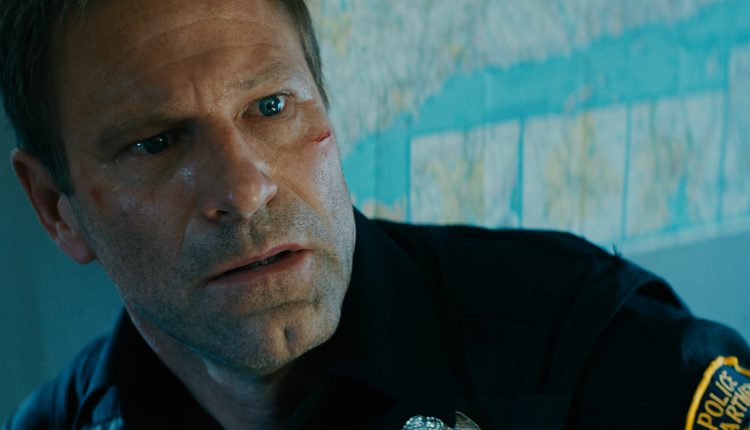 Aaron Eckhart finds himself in a race against (real) time to save a young girl’s life In The Line Of Duty.

When a stakeout goes wrong, disgraced street cop Frank Penny makes a bad situation worse when he kills the suspect. The problem is he was the only person who knew the location of the kidnapped daughter of Penny’s former boss.

Desperate to prove himself and right this wrong, Penny has 64 minutes to solve the case and save the girl before she drowns in a mystery location. All while having the kidnapper’s vicious brother out for revenge.

The twist here is that director Steven C. Miller has the 64 minute countdown play out in real time.

This concept has featured in films such as In A Nick Of Time, Buried and Crank. It is given a modern spin here by having Penny assisted by an online journalist Courtney (Ava Brooks) who streams the entire hunt live on the internet. She uses this online presence to help decipher clues but it also leads McKenzie to follow their progress.

It is interesting to see two actors whose Batman characters were both driven insane by the Joker after “one bad day”, face off against each other.

Aaron Eckhart‘s Penny is full of bravado and bluster. Constantly moving forward like a shark that has caught the scent of blood. While McKenzie is clearly having fun letting loose as the bad guy, chewing tobacco and scenery.

The movie kicks off with a 20 minute foot chase through the L.A. streets, shot with frenetic, fast and furious energy. As hard as it tries, the film is unable to sustain that momentum and urgency throughout the subsequent run-time. The exception being an intense shootout sequence that (as all gunfights in L.A. do) homages Michael Mann’s Heat.

At times it feels as though the central concept is forgotten about. Beyond a couple of glances at a watch, there is little reminder of the deadline and this should be placed front and centre. Given the online streaming aspect, a countdown clock could easily have been on display whenever cutting to the feed.

As the clock ticks down the twists, turns and revelations come thick and fast. Ensuring the film is able to sprint rather than limp over the finishing line before time runs out.

In The Line of Duty is a diverting way to pass 98 minutes but upon reflection there are better ways to spend your (real) time.