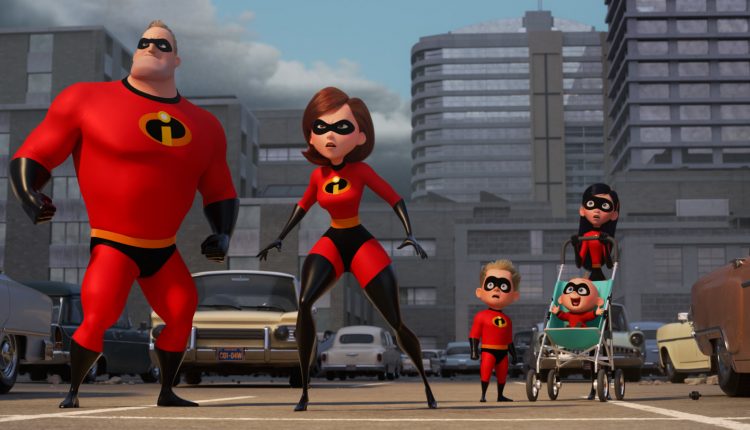 The Incredibles 2 picks up straight off from where audiences left the Parr family at the end of the first film but would Pixar be able to recreate the magic of the original after a gap of 14 years?

The answer is a resounding yes.

Having outed themselves to the world fighting the Underminer, The Incredibles find themselves at odds with a world that has moved on from ‘Supers’. Their actions are still illegal but a wealthy, billionaire philanthropist wants to change that.

Believing that a positive PR campaign could help turn public opinion around and force a change in the law, Winston Deaver (Bob Odenkirk) puts Elastigirl (Holly Hunter) front and centre as the face of the campaign. This leaves Mr Incredible (Craig T. Nelson) at home to deal with his biggest challenge yet…looking after three superpowered children.

It is fair to say that the superhero genre has come a long way since 2004. Marvel Studios was but a dream in the mind of Kevin Feige; the DC universe was about to get very dark with Christopher Nolan’s take on the Batman franchise, and audiences worry that the genre is reaching saturation point.

Yet it is a credit to Brad Bird’s script and filmmaking style that The Incredibles 2 feels like the perfect superhero movie for this particular time. One might say that it is not the film we deserve but it is the one we need right now.

Coming off the back of the #MeToo movement, it is pleasing to see Hunter’s Elastigirl take the lead in terms of the action (‘About damn time’) as she battles the villainous ScreenSlaver who uses people’s addiction to screens and technology to submit them to mind control.

From a train rescue that is reminiscent of Spider-Man 2 to a sequence where Elastigirl tracks ScreenSlaver’s location through the city that feels akin to the Batman: Arkham City video games, the action is on a par with any recent blockbuster in terms of scale and cinematic wonder.

However, it never forgets that it is a Pixar film. Their unique brand of humour and sense of fun and joy is as infectious as Jack-Jack’s laugh during the scenes where Bob adapts to life as the stay-at-home dad. Edna Mode would approve as Mr Incredible finally learns the valuable lesson that not all heroes wear capes.

The Incredibles 2 is Pixar’s best sequel since Toy Story 2 and also one of the best superhero sequels. It is worthy of mention in the same breath as Spider-Man 2, X2 and The Dark Knight.