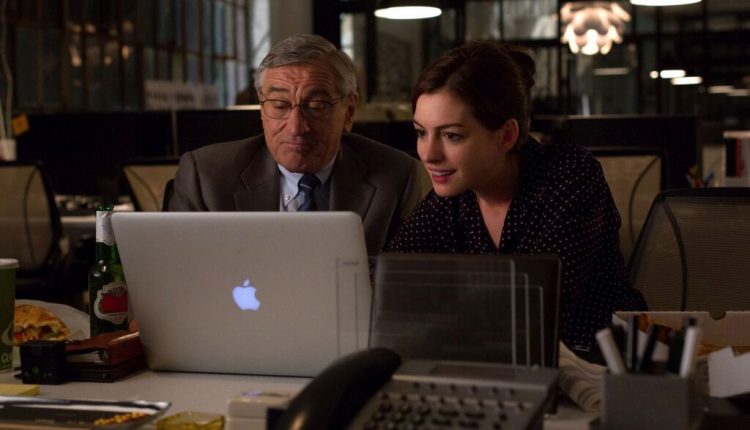 Comparisons will inevitably be made between Writer / Director / Producer Nancy Meyers’ new comedy The Intern (2015), and that other great take-off of the notoriously bitchy world of fashion, The Devil Wears Prada (2006) – a pithy and dryly humorous look at the life of a put-upon assistant to the head honcho of a leading fashion company. Look closer however and the only real similarity is the fact that both films feature the eternally bouncy and charismatic actress Anne Hathaway.

Ben Whittaker (Robert De Niro) is seventy, a widower and recently retired. However, though his interests and family keep him busy, he feels that something is missing: he misses the buzz of the workplace and interacting with his old colleagues on a daily basis. One day, on a whim, he answers an advert from an internet fashion company who are running an intern programme for ‘senior’ employees. After a rocky start Ben is given the post of assistant to the company’s founder and chef executive Jules Ostin (Hathaway), which is only the start of the problems for both of them.

It would be good to be able to find something deep and fresh to say about The Intern. However, though there is nothing wrong with the film, beneath the surface it really is just another vehicle from Nancy Meyers, the woman who has more or less reinvented the sophisticated romantic comedy for 21st century Hollywood. The creator of such previous hits as Something’s Gotta Give (2003) and The Holiday (2006), Meyers can do no wrong where this kind of big budget film is concerned. Her previous work – the majority of which, to some extent, revolves round family and friends – though not always favoured by critics, seems to hit a note at the box-office. The characters and settings may change, but chip away the glossy surface and the basic films follow the same blueprints, dealing with those fraught and complex things called relationships which all of us can relate to.

What is The Intern’s strength though, may also be its failing. Ultimately it feels that there is nothing new about the film and watching it you can’t help but feel that you’ve seen it all before. It may be a novelty to have Robert De Niro – a man who has built a career portraying none too savoury characters on screen – playing a good guy, and one who’s not afraid to embrace his softer, human side. It’s also refreshing to have a film which casts older women like Rene Russo – as Ben’s love interest – in a positive and independent light, even if her role is but a side-note to the main action. But the trouble is that actors like De Niro and Russo – and Hathaway in her lead role – could do these parts in their sleep. There’s fundamentally nothing wrong with what they do, but neither is there anything here which you feel pushes them as a performer, or provides something of lasting substance for the viewer.

This however is really just nitpicking, about a film which delivers exactly what it promises on the poster. Watching this kind of film you are not expecting some long treatise on equality and agism at work and, while The Intern may not have the acidic wit of The Devil Wears Prada, as a charming, feel-good outing, it leaves the viewer with a sense that everything will turn out OK in the end. Which maybe isn’t such a bad message, when faced with the often jaded and harsh outlook on life that movies seem to depict with increasing frequency.