Also known as “that one with Vince Vaughn and Owen Wilson working for Google”, The Internship is one of many hi-concept movies in recent years that has forgotten what a hi-concept actually is. Vaughn and Wilson sparking off one another in the main workspace of Google isn’t ripe with comic potential. No, it’s just ripe with the potential to keep Google onscreen for the length of an entire movie. And Google don’t have any problem getting their name onscreen nowadays. If you don’t believe me, just Google . . . . . . . . Google (but be careful not to break the internet).

Directed by Shawn Levy, working from a script co-written by Vaughn and Jared Stern, The Internship is lazy and comfortable at every turn. The leads aren’t as funny or sharp onscreen now as they used to be, the supporting cast isn’t strong enough to make up for them, and the whole thing feels just a bit sad. 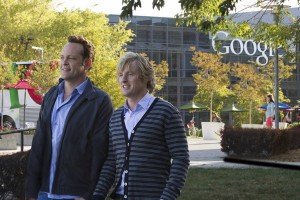 Vaughn and Wilson are a couple of salesmen who end up on the scrapheap. Thankfully, Vaughn manages to help them blag their way into an internship at Google, because that’s an easy thing to do (okay, okay, I know – suspension of disbelief, but come onnnnnnnn). Once there, they become the butt of many jokes because of their age and inexperience with computers. They end up placed in a team made up of various folk who weren’t picked for any other team, and as everyone struggles to better themselves and pass a number of tasks it soon becomes clear that Vaughn and Wilson DO have other qualities to make up for their lack of techno-knowledge.

Rose Byrne appears here as a potential love interest for Wilson, Max Minghella plays a cocky young man who ends up becoming the villain of the piece, Aasif Mandvi is a strict tutor, and Josh Brener, Dylan O’Brien, Tiya Sircar and Tobit Raphael play the other team members, youngsters who eventually start to benefit from spending time with Vaughn and Wilson. Nobody excels, nobody steals any of their scenes, nobody tries to do anything that will lift this film from the bog of mediocrity that it ends up mired in. Cameo roles for John Goodman, Will Ferrell and Rob Riggle DO help a little bit, with Ferrell being on particularly good form, but they also serve as a reminder that the film, ironically, needs more experienced actors to wring the laughs out of the storyline. 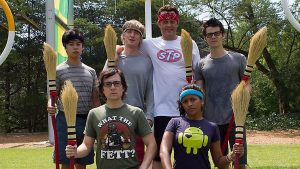 Levy will never be short of work, as he can deliver safe comedies that often make a profit, but this is one of his worst efforts. In fact, the sooner Vaugh and Wilson rack up a few more movies to put this one behind them, the better. Nobody comes out of this looking good. Apart from, perhaps, Google.