You would think after the success of Cabin in the Woods and You’re Next the combination of secluded cabins, suspicious locals and house invasion would become stale, yet South Korean horror / comedy Intruders was a film that managed to render the formula fresh, combining Coen Brothers black comedy with a sprinkle of Eastern class. The plot itself is safely formulaic, with young screenwriter Sang – Jin taking up his producer’s offer of an isolated country house to finish his script. Yet when journeying from the populated bustle of Seoul to village isolation almost everything goes wrong, starting with the meeting of a extremely pushy bus passenger (Oh Tae – Kyung), a man straight out of jail and claiming to live near the location the scriptwriter is staying

With almost all interactions playing off screenwriter Sang – Jin’s social awkwardness and inability to say ‘no’, he soon finds himself accommodating a range of people at the cottage,  ranging from the plain annoying to genuinely menacing, as  director Nah – Yung Seok skilfully denies audiences the perspective to decide which characters fall in which group. When the bodies start (inevitably) hitting the floor, Intruders gleefully subverts genre conventions in the style of many modern meta – horrors, maintaining both tension, comedy and the occasional violent shock,  in a murder mystery spiralling out of control. 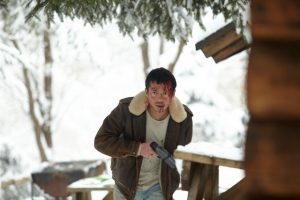 With the central character of Intruders being a screenwriter, it’s perhaps fitting to mention the quality of the script itself, with dialogue scenes involving menacing ‘good samaritan’ Oh Tae – Kyung often stealing the show, transforming the scripts conversational power dynamics, suspicion and misunderstanding into sequences where the whole ensemble cast seem hilariously confused. Even though the film takes place in a self – contained location, littered clues throughout the film reveal a wider context that become decisive to the films finale, in a brilliant twist of fate that tempts a sequel and rewards viewers attention to detail.

Prior to EIFF 2014 I was not familiar Nah – Yung Seok but if Intruders skilful storytelling, anarchic set – pieces and self- awareness are anything to go by, I look forward to seeing what he comes up with next.