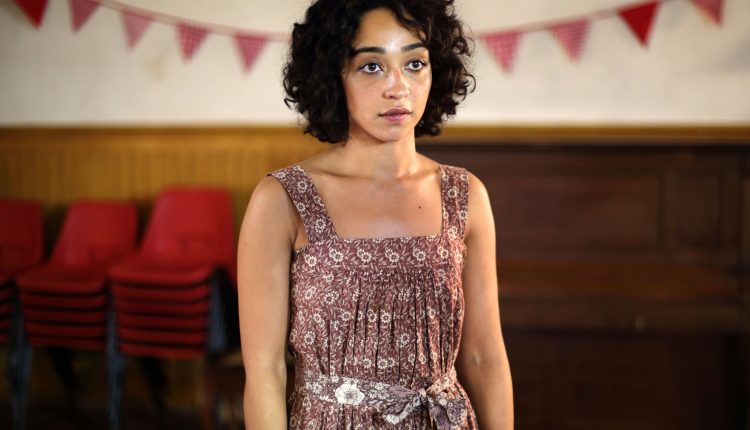 There’s a bit of a problem with the many serious dramas that I see at film festival time. On the one hand, they can all start to blend into one another, and it can become quite an endurance test. On the other hand, a good film is a good film, whether or not it conforms to your usual choice of entertainment. Iona is covered by both. It didn’t seem to go down too well with the friends I saw immediately outside the screening, but I kept mulling it over as I walked along the road. And I eventually accepted the fact that I really quite liked it.

The film starts with a bit of a jolt, as young ‘Bull’ (Ben Gallagher) discovers his mother (Ruth Negga, playing Iona) being abused by a policeman. He reacts strongly, and understandably so, and that leads to mother and son heading somewhere far away, somewhere peaceful. Yes, they head to the island of Iona. Iona, the woman, grew up on Iona, the island, until she became a young woman and decided to try building a life on the mainland. Her return to the island causes some to greet her with unease and viewers soon realise that there’s some history to be explored.

Written and directed by Scott Graham, Iona comes close to losing viewers in the first 15-20 minutes. After that initial shock it slows down to a pace that is so slow you’d be forgiven for thinking it had stopped entirely. The middle section, however, has some good stuff in there, even if it’s quite easy to stay one or two steps ahead of the unfolding plot, and everything builds nicely to a potent thundercloud of a finale. What I enjoyed most about the film, aside from the great acting across the board (more on that in a minute), was the tension derived from wondering just who was aware of the past events and who wasn’t. There were also one or two scenes that become darker and much more perverse when you stop to really think things through, which the sedate pace allows you to do.

Negga is perfectly cast in the central role, with her performance elevated by the work done by young Gallagher. Douglas Henshall is as reliable as usual, and Michelle Duncan, Tom Brooke and Sorcha Groundsell all do excellent as the people who may be most affected by the return of Iona. It’s worth noting that Groundsell outdoes her elders, although she has the benefit of playing arguably the least complicated of the main characters.

Much like the waters surrounding the island itself, Iona is a very calm, cold film that hides a powerful undercurrent. I was praying that it would all be over quickly when those early scenes threatened to bore me to tears, but by the time the end credits came up I was wishing that I’d been able to spend even more time getting to know the people in this cinematic world.

Iona was the film chosen to close EIFF 2015.