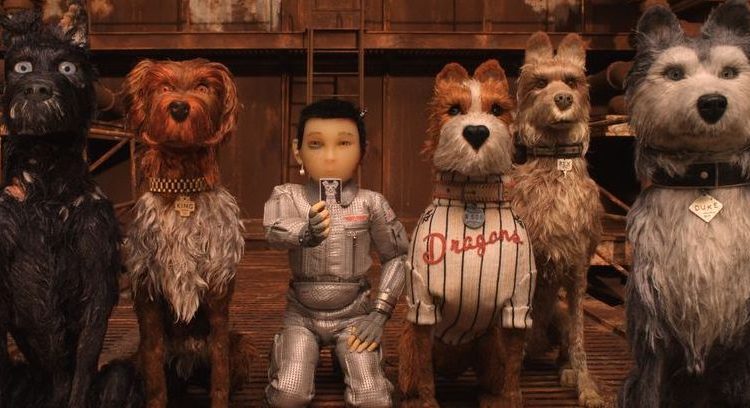 In 2009, Wes Anderson ventured into the world of animated features with his adaptation of Roald Dahl novel Fantastic Mr Fox. Using stop-motion animation, it combined the director’s use of models and miniatures with his trademark visual style. Ten years later, he follows his award-winning comedy The Grand Budapest Hotel with his second animated feature, starring an ensemble cast that includes Bryan Cranston, Jeff Goldblum, Greta Gerwig and Frances McDormand.

Set in near-future Japan, Isle of Dogs sees all canines banished to Trash Island due to ‘dog flu’. However, a pack that includes stray Chief (Cranston), sports mascot Boss (Bill Murray) and gossip Duke (Goldblum) rescues and ultimately helps a young boy called Atari (Koyu Rankin), after he crash-lands onto the island to find his beloved pet Spots (Liev Schreiber).

First of all, Isle of Dogs’ concept of dystopian Japan is limited, thanks to its human characters. The natives are either shown to be cat-loving officials or rebellious dog lovers who, although incredibly expressive, are brisk in conversation. However, the film is primarily driven by English-speaking actors and dialogue, which overshadows its Oriental setting. In addition, the inclusion of Caucasian characters such as interpreter Nelson (Frances McDormand) and American exchange student and the film’s ‘white saviour’ Tracy (Greta Gerwig) gives the idea that they are needed for the film to relate to English-speaking audiences without the risk of being lost in translation.

Most of the film’s Japanese characters also come across as one-dimensional. Anderson ensures certain stereotypes such as geeky students, sumo wrestlers and impassioned scientists are among the characters, but none of them really lifts Isle of Dogs‘ lack of cultural representation. It is a shame that this also applies to Atari, as the sentimentality of his heartwarming quest is marred by his snappy dialogue.

Ultimately, the film belongs to the dogs. Comprising of mostly domesticated canines, their democratic nature and willingness to scrap over trivial things such as leftovers is entertaining, and their almost-immediate loyalty to Atari and his quest highlight the idea of man’s, or in this case – boy’s, best friend. The ensemble cast wonderfully delivers Anderson’s deadpan dialogue while leaving the beautiful animation and eye-catching visuals to guide the audience’s imagination.

While its cultural factors might ruffle some feathers, Isle of Dogs is Anderson’s most visually intricate film to date and highlights his talent as an animated filmmaker.

Isle of Dogs is out in UK cinemas on 30 March.