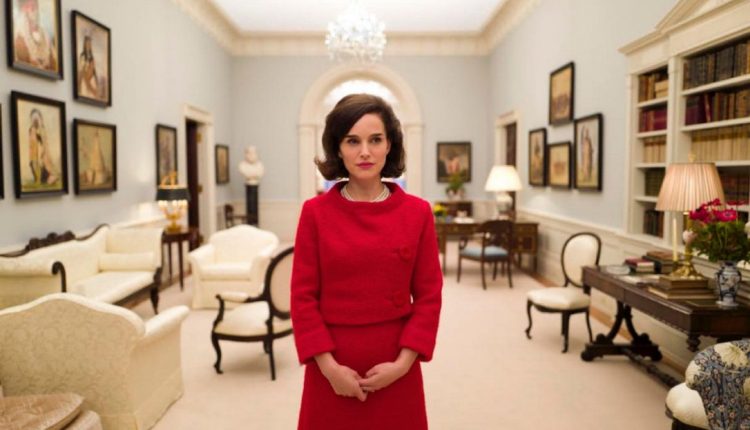 Few families have proven as adept at mythmaking as the Kennedys. The early ‘60s were a glorious golden period, a time when Civil Rights finally made the agenda, a US President faced down the USSR and seemed to do ok, and America set out on the path to the moon. It’s easy to imagine the world of JFK was a magical place of like-minded men motivated by idealistic zeal. The truth is much greyer but the myth abounds. Few did more to promote it than Jacqueline Kennedy Onassis who helped to spin JFK’s White House into a wondrous Camelot in the immediate aftermath of his assassination.

One feature written by journalist and old family friend Theodore H. White went some way to painting that particular picture. He interviewed her for a piece that she had significant final say over. Jackie, Chilean filmmaker Pablo Larraín’s first English language feature takes this meeting as its focal point, building out a highly unconventional exploration of public and private faces, and the space in which they meet.

The first, and most noticeable element in Jackie is Natalie Portman. Her physical resemblance matters little when she’s managed to capture the outer performance so perfectly. Watch recordings of the First Lady and you’ll see Portman locks down the voice, odd sounding though it may be, and the mannerisms. There’s far more to a performance than simple impersonation though. What makes this Portman’s finest yet, and one of the very best of the year is the way she internalises Jackie. Carefully mastered tics feed into her testy retorts to Billy Crudup’s journalist White; they fire up the confusion and grief she is feeling without her husband, and guide the way she steers through the emotional maelstrom.

Her name is on the movie and her face is everywhere. She’s surrounded by famous public figures but all recede into the background. That’s only one of the ways Larraín, working from Noah Oppenheim’s brilliant screenplay, breaks from biopic conventions. By now Hollywood has churned out so many attempts to immortalise individuals, an easy-use formula exists. Very little of that is on display here. Standard soaring strings and martial drums are nowhere to be heard (Mica Levi has the score under control and it’s another stunner), nor is there space for overblown cameos from recognisable faces, grandstanding speeches that sum up character traits in a neat little package, or schmaltzy family moments. Instead, Jackie drifts around the White House in shock after the terrible event, glides with carefully concealed imperiousness before, and plots the legacy of her family with White from the comfort of her home.

Larraín brings his usual washed out colour palette and elegant compositions to round off the party. Jackie is framed within shots in various ways; between pillars outside her house, by lines of trees, through windows. She’s always on show and we’re always watching from a distance, kept at arm’s length while straining to get a better look.

This brings Jackie full circle, back through Oppenheim’s clever screenplay, the unexpectedly dreamy feel and Portman’s commanding performance to the private and public faces of Jacqueline Kennedy Onassis. Jackie shows them both; how one bleeds into the other and then back again until the public image has been set. She appears to have succeeded. After all, the myth of the Kennedys lives on.