Leaving the mother and wooing the child

Garrel is on (literally) familiar, almost inbred, territory in Jealousy, a handsome new black and white ‘scope film featuring his son Louis in a role based on his grandfather, Philippe’s father, the actor Maurice Garrel, who died in 2011 and dealt at this age (Louis is now 30) with two girlfriends and a child by the one he has left. There were questions about Philippe’s previous film, Un été brülant (“A Burning Hot Summer”), whose colour when I saw it in a little Paris cinema looked bad (I hope a projection problem), and action desultory, the performance of Monica Bellucci and her casting as Louis’ wife dubious. Jealousy isn’t a stretch for Philippe — it’s the same kind of film he has made before; but it moves with an easy, sprightly rhythm, and Louis’ improvisatory skills are shown to fine, yet unobtrusive, advantage, particularly in scenes with the feisty and irrepressible Olga Milshtein as his little daughter. Louis’ sister Esther Garrel plays the film Louis’ sister.

Still possessing his pale, poetic good looks and irrepressible mop of black hair, Louis Garrel has had a good decade since he first came to the attention of the international audience in 2003 (at 20, obviously) with Bertolucci’s The Dreamers. He has played muse for two filmmakers, his father, who’s used him four times, and Christophe Honoré, who seems madly in love with him and has wanted to use him in every film he’s made since their first outing (with Isabelle Huppert) in the dicey oedipal story, Ma Mère, six times so far. His roles with Honoré have been more varied, those with his father, more iconic. 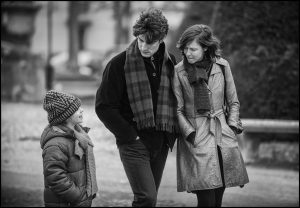 The latest Louis is an impoverished actor. He leaves Clotilde (Rebecca Convenant) at the outset, devastating her. But as the first section title says, “Je gardais les anges” (I kept the angels), which apart from a personal anecdotal meaning refers to Louis’s maintaining regular (and charming) contact with little Charlotte (Milshtein). He lives in a garret with his new “femme,” Claudia (Anna Lougalis), once a coming actress, now unable to find work for years. Louis tries to help Claudia get a role, in vain. Clauda becomes despondent; she hates the garret. In the director’s words, “The woman cheats on him. And then she leaves him. The main tries to kill himself, but fails. His sister visits him in hospital. She’s all he has left — his sister and the theatre.” 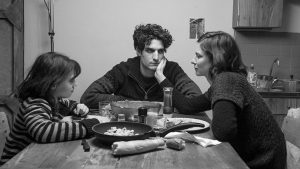 Charlotte is Philippe Garrel as he was as a child. She meets Claudia, and in admiring her, she makes her mother, Clotilde, jealous, as he once did.

The flow of scenes is rather like Philippe’s personally autobiographical I No Longer Hear the Guitar (FCS 2008), with the same classical simplicity, softened by Louis’ ease on screen and chemistry with the “ladies,” including the little girl, arguably more technically accomplished, despite simple means. One thing that’s different this time is the involvement of Caroline Deruas, Arlette Langmann, Marc Cholodenko, and Philippe Garrel in the writing of the scenes, with different people, occasionally more then one, writing a random sequence of scenes, and Philippe using what worked best, making this in the words of Leslie Felpein of Variety more “tightly scripted” than usual, also, due largely to the lightly sentimental, slightly comic father-daughter scenes, possessed of an “unexpected emotional warmth” (she adds). Philippe is well served by the hand-held Scope camera work of Jean-Paul Meurisse and Willy Kurant as d.p. Music is sparingly used as a brief connective between big segments. Editing by previous associate Yann Dedet (who worked with Truffaut and Pialat), also adds to the good work here.

It is hard to imagine my liking any Philippe Garrel film better than his deeply atmosphere meandering epic of 1968, Regular Lovers(NYFF 2005), (which makes Bertolucci’s look like an empty, if pretty, bauble), but Jealousy is among the Garrel films one could enjoy coming back to. And it’s blessedly short. Yes, every Louis Garrel role in a film by his father has involved a young man attempting suicide, sometimes successfully — all part of the doomy poetic mood, lightened a bit this time. (For a beautiful but gloomier and less emotionally engaging outing of the two Garrels, see The Frontier of Dawn (FCS 2009), reviewed here at another earlier Lincoln Center series. 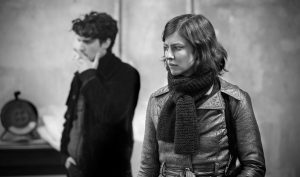 La jalousie debuted at Venice and was screened for this review as part of the New York Film Festival at Lincoln Center, Sept.-Oct. 2013.