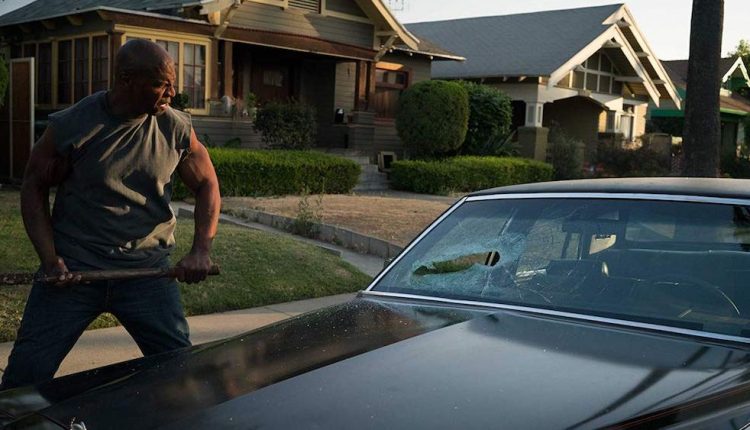 As a folk hero larger than life, the character of John Henry was wondrous in myth and legend. However, as an on-screen reformed urban gangster trying not to revert back to his violent and chaotic ways this muscular-bound menace seeking redemption is not as appetizing as his literary blueprint. In co-writer/director Will Forbes’s half-baked, hedonistic inner city revenge thriller John Henry, thug life in the mean streets register with all the generic luster of a rusty sledgehammer.

The cinematic sentiment to bring the sledgehammer-wielding behemoth to the modern-day concrete nightmare of city-wide plight in South Los Angeles seemed somewhat intriguing. Unfortunately, Forbes and fellow scriber Douglas Skinner concoct a relentlessly wooden B-grade actioner that has nothing insightful or igniting to contribute to the ubiquitous gangsta genre. Aspiring grittiness and gumption cannot prevent the toothless John Henry from its messy outlandishness.

The likable and massive TV/movie veteran Terry Crews plays Henry, a former gang member looking to completely ditch his complicated experiences from yesterday in order to turn over a new leaf. Both Henry and his wheelchair-bound father “Pops” (Ken Foree) simply want to find peace of mind at their shared homestead. Nevertheless, things start to change when Henry’s life is turned upside down courtesy of an unsuspecting visit from a Central American young woman named Berta (Jamila Velazquez) fleeing from a gang-related card game gone deadly. The shooters (Berta’s brothers) involved in the bloody gathering took exception to what went down with the crew at the house led by the ruthless Hell (Chris “Ludacris” Bridges). Now the surviving iron-jawed Hell and his manic minions want their “property” Berta back at all costs.

Thus, Henry and Pops decide to make a crucial decision to shield the jeopardized Berta away from the frenzied forces out searching for the embattled street-wise diva. From the cops combing the neighborhood to the poisonous ire of Hell and his hellraisers on the prowl to apprehend the wanted Berta Henry must contend with the dark side of his evil-minded cousin…you guessed it…the raw and reckless Hell. So now the familial loyalties are tested as the good side (Henry and Pops) must combat the bad side (Hell and company) for the sake of protecting the imperiled Berta and her brother Emilio (Joseph Julian Soria).

There is nothing here to celebrate with sordid exuberance in the spotty and painfully cliched John Henry. The plot has all the swagger of cheap storefront jewelry. The suspense strains despite Crews’ scowls and the flood of gang-bangers parading around in cartoonish strife. The manufactured mayhem feels plodding and the bonding moments–from Henry’s relationship with his ailing father to the pretty little sass he is sworn to guard in Berta–seem rather contrived. Henry’s left field reunion with a classmate Tasha from the past (Kimberly Hebert Gregory) is tacked on for intimacy consideration yet is perceived as a side distraction to the meandering goings-on that persist.

The role of John Henry suits the bulking Crews to gradually go badass and find some toxic adventure in this sketchy thug thriller. Still, the meager material fails Crews and company which is quite disappointing because this vapid vehicle could have been a stepping stone for the hulking performer to chew on with intense impishness. Ludacris is totally handcuffed as a metal-faced gang leader better suited for a low-grade animated Batman villain than he is for a hackneyed urban actioner.

Indeed, John Henry is hammered but not the preferred way you would expect the boisterous big guy with hard-boiled heft to roll with convincing authority and angst.