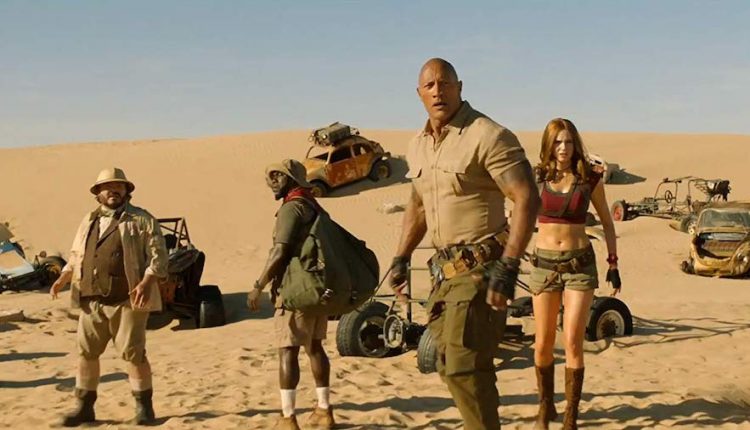 Reuniting the director and core ensemble cast of the 2017 box office hit, Jumanji: The Next Level is the fourth instalment in the film franchise. After the events of the first film, The Next Level sees Spencer (Alex Wolff) secretly keeping and reassembling the smashed-up Jumanji video game. His friends soon discover that he has returned to the jungle and choose to re-enter it to save him, with unexpected results.

Despite initial misgivings, the choice to update Jumanji for the 21st century was a smart one. Its diverse casting and video game ‘adaptation’ style saw it gross more than $900 million and revived the franchise for modern audiences. Almost two years later, director and co-writer Jake Kasdan aims to deliver another crowdpleaser that offers another layer of entertainment.

While Welcome to the Jungle saw the group overcome their social labels, Jumanji: The Next Level sees them struggling with real life. Bored with his mundane life, Spencer is notably suffering from this reality check as he misses the thrill of the adventure – as well as being ‘super’ hero Boulder Braverstone (Dwayne Johnson). His return to the game comes across as impulsive and selfish but this is quickly brushed aside to focus on the gang’s survival.

The narrative occasionally suffers from corny emotional moments and predictable jokes, the latter of which mainly come from new characters such as Spencer’s grandfather Eddie (Danny DeVito) and Eddie’s former business partner Walter (Danny Glover). Inadvertently sucked into the game with Spencer’s friends, their characters’ unfamiliarity with their avatars, along with their newfound physicality, offer light relief via the amusing screenplay and fun-filled set pieces.

In addition, the screenplay also makes the most of the fluctuating roles, which reinforce the comedic performances of the film’s returning cast. All of them, especially Johnson, Karen Gillan and new addition Awkwafina, provide solid performances that showcase a balance of action and comedy to nicely round up this unexpected surprise.

Thanks to its strong cast, Jumanji: The Next Level avoids suffering from ‘poor sequel’ syndrome and brings another entertaining instalment to this almost-15-year-old film franchise.

Jumanji: The Next Level is out in UK cinemas on Wednesday 11 December.