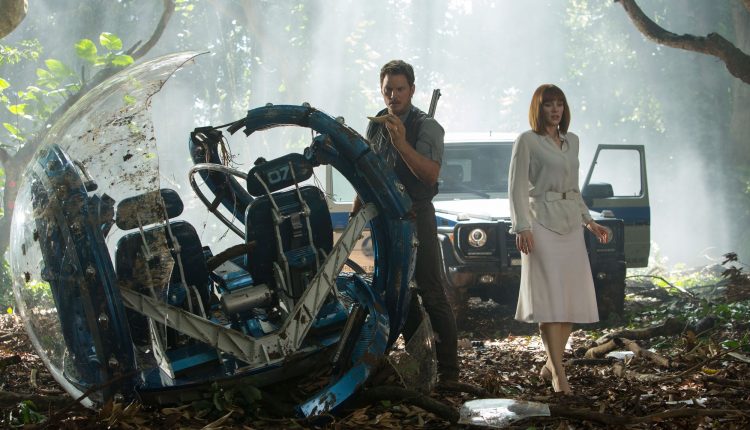 Upon entering Jurassic World, it’s hard not to share that same scared apprehension felt by Jeff Goldblum’s Ian Malcolm when he stepped on to Isla Sorna at the start of The Lost World. After all, let’s face it, the odds of Colin Trevorrow’s long awaited forth sequel, to Steven Spielberg’s game changing original, being any good were relatively low.

It’s been 14 years since Joe Johnston’s redundant, run-of-the-mill threequel confirmed what many of us had sadly suspected for sometime, that this was a series on the edge of extinction. A mindset understandably unaltered by many when they got their first glimpse of this new chapter, and discovered with horror that humans had somehow tamed the franchise’s fiercest force, the Velociraptor. Bringing dinosaurs back from the dead was one thing, but it would take more than a miracle to breath new life in to this beast.

Thankfully though, just as Malcolm once prophesied, life has found a way. By taking the DNA of author Michael Crichton’s original creation, splicing it with Spielbergian style, and filling in the gaps with threads of nostalgia & wonder, Trevorrow has finally created a sequel that, though not as strong, is a worthy successor to the unimpeachable first film.

It only takes five minutes for the sophomore director to assure us we’re in safe hands. As we enter the park for the first time, John Williams’ symbolic score starts to rise, building slowly as we catch glimpses of what lies within, before reaching an almighty crescendo as the doors are flung open to reveal a park that’s fully functioning, and fantastically well realised. Like the late Richard Attenborough’s John Hammond, this is something we’ve dreamed of seeing ever since we first journeyed through those iconic main gates back in ’93, and the moment we’re finally allowed to gaze upon it is an evocative & euphoric one.

The two tourists we’re accompanying on this trip are teenager Zach (Nick Robinson) and his prepubescent brother Gray (Ty Simpkins), who happen to be the nephews of Jurassic World’s operations manager Claire (Bryce Dallas Howard). However, while Zach & Gray are out enjoying the park’s many attractions, Claire is at the mercy of a corporate mandate to bring in more revenue.

Enter the Indominus Rex, a powerful & predacious new GM hybrid that’s been concocted in the Genetics Lab by Dr. Henry Wu (BD Wong, the only returning member of the original cast). Claire’s hope is that by unveiling this deadly new dinosaur, visiting figures will rise. But all that is put into doubt after the Indominus manages to escape from its enclosure, and sets off on a murderous rampage across the park. To make matters worse for Claire, both of her nephews are unaccounted for, forcing her to head out into the World accompanied by hunky handyman Owen (Chris Pratt).

From the start its clear that Trevorrow is aware of the enormous footsteps he’s following in. Unlike his debut, the perpetually patchy Safety Not Guaranteed, Jurassic World shows him to be a filmmaker who’s able to compose himself with confidence. Just as Spielberg’s was, Trevorrow’s approach is admirably restrained. Instead of a gigantic, grandstanding opening, the story treads slowly to start with, allowing an enveloping sense of the dread to build before the full furious force of the park’s prehistoric predators is unleashed.

Once all hell has broken loose though, Trevorrow makes sure that the pressure remains palpable. He handles the various set pieces with great aplomb, taking his cue, once more, from Spielberg in order to ensure that each sequence is both terrifically tense and teasingly terrifying. The Indominus’ escape bracingly brings to mind the tremendous T-Rex reveal from the from the first film, while a later scene that sees a pack of Velociraptors perusing their prey conjures menacing memories of the Raptors in the long grass segment from the sequel.

Naturally, much of the film’s heightened fear factor comes from the carnivorous creatures themselves. Early on Claire claims that “no one’s impressed by dinosaurs anymore”, but she couldn’t be further from the truth. Seamlessly blending a mix of flawless CGI with practical effects, Trevorrow & the SFX team at ILM have created a remarkably well-rendered set of specimens. Don’t be fooled by the trailer, the Raptors remain viciously versatile, and the sight of an approaching T-Rex is still enough to test your bladder’s capabilities. But the undisputed queen of the jungle this time round is the Indominus Rex herself, a chillingly cold and calculating killing machine that immediately captures the imagination in a nightmarish way.

If Gareth Edwards’ ropey Godzilla reboot taught us anything though, it’s that you also need a set of engaging central characters to anchor the situational jeopardy. And thankfully, Trevorrow has learned from Edwards’ mistake. Though they may be archetypes, these are people with personalities. Chris Pratt’s Owen oozes charismatic charm. But crucially, he also shares a strong chemistry with Bryce Dallas Howard, who herself does a sterling job with a convincing arc that sees Claire gradually develop from a bitchy businesswoman into someone tougher as the crisis worsens.

The true revelation here though, is Trevorrow himself. Throughout, he maintains a balance between thrills & chills whilst also sustaining a solid level of humour, much of which is wryly self-reflexive & comes from Jake Johnson’s control room operator Lowery.

Perhaps inevitably, Jurassic World does fail to match the monolithic magnificence of Jurassic Park. Though there some interesting thematic ideas in play here, the evolutionary argument once again resurfaces, the script lacks the cohesion & intelligence necessary to stop them from getting lost in amongst the constant bombardment of chaos.

What Jurassic World lacks in smarts though, it makes up for in pure spectacle. This is summer blockbuster entertainment of the highest calibre. It has taken 14 years to get to Jurassic World, but it’s been well worth the wait.