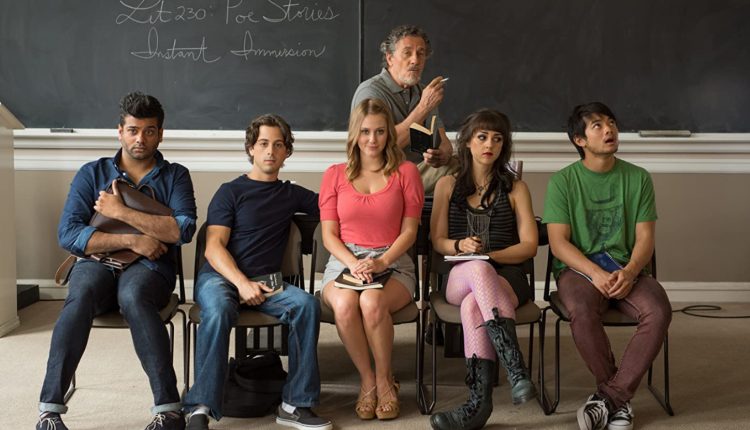 A dark comedy with an intellectual heart, Killing Poe is a wonderfully novel film with surprises at every corner.

Five students all enrolled in the same lacklustre Edgar Allen Poe class work together to teach their awful professor a lesson. However, the team’s plan goes horribly wrong and they are left to wrestle with the same paranoia they have been learning about in class. Several twists and turns later, the five unlikely friends have to take control of their lives and find that the truth, hard as it might be to face, really can set you free.

There’s something so endearing about this film that I cannot quite put my finger on. Perhaps it’s the Bryan Fuller-esque writing that’s fun without being silly, and intelligent without being boring. It might be the stylisation that makes this film more like a theatre production, or the actors who all do their job wonderfully and seem to really understand their script and its direction.

Perhaps it’s that the characters all seem to genuinely like each other, something that is rare in films of this genre. When they are nicely laid out for us in the introduction, just as Poe would do, they seem to be your typical cast. There’s the smart girl, the goth, the unremarkable ringleader, but somehow, they seem modern, and you just like them all instantly. They are different yet cohesive, and diverse without making a point of it. They’re a 21st century Breakfast Club, if the five delinquents had tripped on ‘shrooms and plotted to bury Mr. Vernon alive.

Matt Bush, in particular, shines in the role of Joseph, a young man who feels trapped in his own life, and the group’s leader. His stoner roommate Bud (Osric Chau) defies the usual stereotypes and is incredibly endearing to watch. Even the enigmatic groundskeeper Mr. Brown (Xavier Lamont) adds a lot of humour to what would otherwise be quite a dark comedy. In fact, all the characters seem to defy expectations. The whole cast is wonderful and the character interactions will leave you smiling.

This film is different without trying too hard, and funny in unexpected ways. What makes it so wonderful is that you can watch it again and again, and find something new in each viewing. Funny and engaging from start to finish, Jacobs’ film is easy to love and bound to make you laugh, and you might even learn something about Edgar Allen Poe too.