My wife spends a lot of time laughing at things with me, but she also spends a fair amount of time laughing AT me. Fortunately, she laughs at aspects of my personality that she finds endearing. One of these aspects is the way I bristle and turn into a “class warrior” at the drop of a hat. I’ve even been known to hate my own move into the middle class. But then I convince myself that I can try to change the system from the inside. And I get to buy myself more stuff.

Why am I starting a review of a teen movie, written by John Hughes, by discussing my views on class. Well, Some Kind Of Wonderful remains one of my favourite films, despite the fact that it’s far from a perfect film. And it’s about class. To put it simply, this is Pretty In Pink for guys. 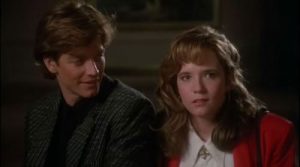 Eric Stoltz plays Keith, the artistic outcast with a best friend who’s a tomboy (the wonderful Watts, played by the wonderful Mary Stuart Masterson). By a strange confluence of events, Keith ends up landing a date with one Amanda Jones (Lea Thompson), a very attractive girl who has just separated from her douchebag, upper class boyfriend (Hardy Jenns, played by Craig Sheffer). Keith wants to make it the perfect date, even with the odds stacked against him. 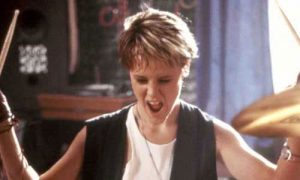 Director Howard Deutch has no surprises for viewers here. This is fairytale stuff, with Cinderella just turned into a young male for a bit of a twist. But he doesn’t need any surprises, because what he’s working with is basic stuff that will appeal to any young man who has ever spent hours daydreaming about landing that perfect date. Hughes certainly knew his target audience, and the script here is spot on when it comes to verbalising what so many teenagers can’t always shout out to those around them. It’s also as heavy-handed as usual, in places, but I can easily forgive it while smiling a dopey, satisfied smile as the end credits roll.

The material is given a major boost by the cast. I’ve always loved Mary Stuart Masterson since first seeing her so her turn as Watts here is just a delight, with the only problem being that she’s so much cuter than Lea Thompson in my eyes that I never understood why the main character would want to be looking around at other girls. Stoltz gives a great performance, giving his character real heart under the mass of cliches, and Thompson does well as the girl he covets. If you wanted a grade-A douchebag int he 1980s then you could go with either James Spader or Craig Sheffer, and neither would disappoint. This is Sheffer doing his best a-hole routine, and it’s fantastic stuff, making him a truly loathsome character. John Ashton excels once again as Keith’s father, a man unaware of how his son fits (or doesn’t) in amongst his peers. Maddie Corman is okay, playing the annoying sister who really, deep down, cares for her brother, and Molly Hagan does fine with her minutes of screentime, but the person almost walking away with the film is Elias Koteas, playing a blunt skinhead who turns out to have a bark that’s a lot worse than his bite. By the time the end credits roll, he’ll be someone that you’ll wish you’d seen more of. 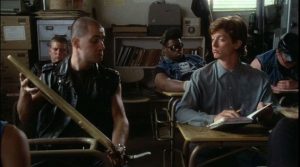 Every time I revisit this movie I worry that I won’t like it as much as I used to. I’m so much older now, the pain of teenage dilemmas a thing of the past (and thank god for that). I’m more cynical, I spend less time daydreaming (apparently) and I just won’t be affected as I was a couple of decades ago. Thankfully, the opposite always turns out to be true. I still feel that this movie was made with me in mind, and I still believe in the optimistic heart beating at its core. I hope others feel the same way.