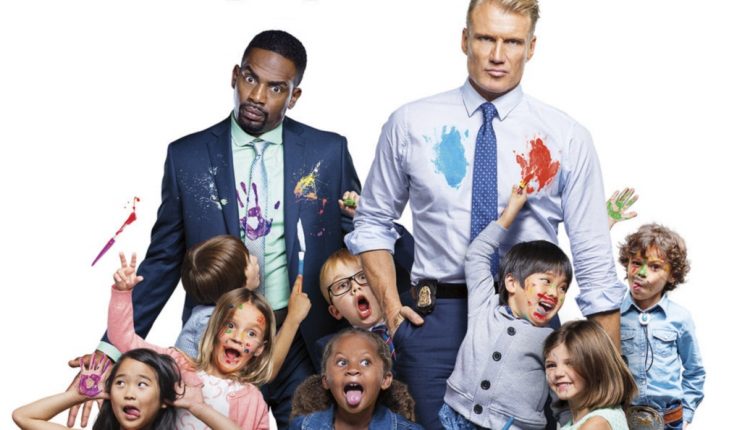 Remember when Kindergarten Cop finished and you sat in the cinema thinking “hmmmm, I’d like to see a sequel/rerun of that, but not for another quarter of a century, and with Dolph Lundgren taking over the lead role from Arnie”? Yeah, neither did I. But if one person had that specific thought then this is the film for them. Only, let’s be honest, this is more of a rerun than a sequel.

Lundgren plays Agent Reed, a tough cop who must go undercover as a kindergarten teacher in search of a valuable flash drive. And he’s woefully unprepared to deal with small children. Fortunately, he has support from his partner (Bill Bellamy) and a gorgeous teacher (Darla Taylor) who is just a classroom away.

There’s no denying the fact that Kindergarten Cop feels a bit, well, lazy and messy. While it may not always lift exact dialogue from the original movie, it certainly tries to recycle many of the jokes. Which wouldn’t be so bad if the execution of the material was better. Director Don Michael Paul, however, seems to be content to create a film that wouldn’t be out of place on afternoon TV, although you suspect that nobody mentioned that to Dolph and co.

Speaking of Mr. Lundgren, he’s the best thing about the movie. It’s just a shame that he’s not all that suited to this kind of comedy, leaving viewers to derive their own amusement simply from seeing his physique and attitude juxtaposed alongside the little kids (to be fair, that was also the focus of much of the first movie, but Schwarzenegger also had a better script to work with). Sarah Strange is also good fun as Miss Sinclaire, the headmistress of the school (which I should have mentioned is a very proper, liberal school that leads to some more laughs when the whole ethos of it confounds Dolph). There’s also an attempt at further comic relief from Michael P. Northey, playing a janitor who tries to bond with our hero. Taylor and Bellamy may not be that great, but they do exactly what is needed, with the former an obvious love interest from her first moment onscreen and the latter a partner to help provide exposition and extra banter.

The two main problems here are pacing and referring back to the first movie. Writer David H. Steinberg does himself no favours when he reworks gags that were done so much better the first time around, and he also seems to lose focus when drawing out certain unnecessary scenes and cutting short other moments that could have been mined for more potential comedy. Considering his extensive background in straight-to-disc features, for the most part, it’s surprising that he wasn’t able to shape this into something a bit more entertaining. Mind you, it’s not entirely fair to question his work when it may have been further changed by the director and editor.

There are some laughs here. This isn’t the disaster that you might think, especially if you saw the horribly cheap trailer that was released a few months ago. It’s just a case of the laughs not quite being plentiful enough, and any of the standard rewarding moments coming along in the third act never feel earned, due to characterisation that stops and starts with our hero having a penchant for Twix bars. Which, come to think of it, may just be a way to give two fingers up to any viewers who don’t like the film.