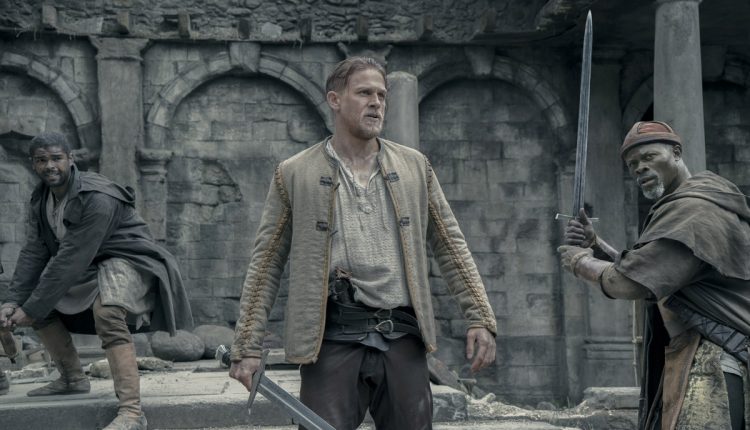 The story of King Arthur and his Knights of the roundtable all supported by the mighty sword Excalibur is one that has been told numerous times. Now along comes Guy Ritchie with his mockney-tude to give it his own spin with a fable filled with a medieval version of Lock, Stock and Two Smoking Barrels. Generating a giggle or two not just for the fun elements but mostly for its absurdity, and that just comes in the form of David Beckham’s painful cameo.

What is clear in Ritchie’s venture is his own diluted version of the age-old tale, a version in which the diamond geezer’s of the 1998 Lock, Stock seem to have found a time machine and thought they would have a CGI loaded stab at recreating the nostalgic cult hit with such ferocious subtlety that you come out the other end feeling like you’ve gone into battle with Ritchie’s Mordred having given your head a good pounding.

The tale of mythological proportions begins with a Young Arthur witnessing the murder of his mother and Father, Uther Pendragon (Eric Bana) at the hands of his villainous uncle Vortigern played with a theatresque brutality by Jude Law. Making his steadfast escape to a little place called Londonium, Arthur is taken in by some compassionate ladies of the night to be brought up in a brothel. Ritchie’s trademark speed editing makes its stealth-like appearance to hustle through the young life of Arthur until he becomes of age and turns into Charlie Hunnam who isn’t quite sure which accent he should be using whether it be a feint Liverpudlian twang or a middle-class Sussex schoolboy.

In the time it’s taken Arthur to grow into a man, the usurper Vortigern has cast his almighty power over the land as King but he is constantly aware of the threat of the rightful King making an appearance to strike a glancing blow to take his bloody ‘ead off!  Vortigern, with the knowledge that the rightful King is the only one who can extract the magical sword out of a rock, which sits knowingly within the medieval grounds of a cold yet grand palace, rounds up, one by one, each man in the prime of his life and forces them to attempt the extraction. When Arthur manages what seems to be the impossible the mighty battles begin. With a reluctant Arthur gathering supporters that range from street urchins to the highest of nobles and a female sorceress, who with the lack of an appearance of the much-known Merlin constantly has you guessing can this be that wizard, who commands birds of prey and animals alike to come to Arthur’s rescue when death seems to be knocking on his door.

The vanity of Ritchie run’s through like a cold meandering slither of blood, even more so when he gives himself a short-lived cameo, but mostly due to the heavy laden use of his CGI editing skills in the roller coaster of battle sequences and monsters.  It’s an entertaining fair, but a dodgy one at that, these cockney barrow boys have no place in medieval England.

King Arthur: Legend of the Sword is in cinemas 19th May.

NEWSFLASH! If you go down to the lake today …….