The King Of Comedy is the lighter, but just as warped, companion piece to Taxi Driver from director Martin Scorsese and star Robert De Niro. It’s a scathing look at celebrity adoration and the quest for fame, something that is all the more relevant nowadays than it was back in the early ’80s. 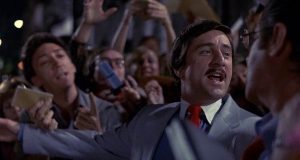 De Niro plays Rupert Pupkin, a bit of a fan, to put it mildly, of comedian/talk show host Jerry Langford (Jerry Lewis). When Rupert manages to help Jerry out of a tight spot, amidst a crowd of grab-happy fans, he takes the opportunity to discuss his plans, his aim to become a very popular stand-up comedian. The king of comedy, of course. Langford listens politely and then brushes Pupkin off with some vague talk of him being welcome to call the office and make an appointment. Pupkin doesn’t read the signals, however, and thinks that Langford genuinely sees something in him that he can help promote to the general public. The longer the situation goes on, with Pupkin being politely dealt with by people who keep him away from Langford, the more obvious it becomes that Pupkin may not just be a socially awkward fan. He might actually be dangerous. 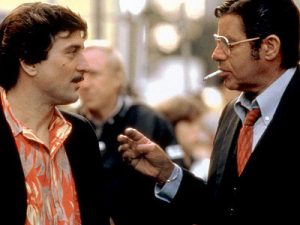 Written by Paul D. Zimmerman, The King Of Comedy gets very little wrong as it winds towards an interesting, and dark, third act. Scorsese revisits themes that he has explored again and again during the course of his career – the strange ways in which people can become celebrities, the dubious choices that can be made for easier fame and riches, debilitating social awkwardness – and creates his usual magic.

De Niro was at the peak of his acting powers in the late ’70s and early ’80s, and his performance as Rupert Pupkin ranks up there with the very best of his career. Yeah, take a minute to let that sink in, especially if you have yet to see this movie. He’s helped by a great supporting cast, including Diahnne Abbot as a young woman that Pupkin wants to impress and Sandra Bernhard as a slightly different, though equally obsessive, fan. And there’s also a good turn from Jerry Lewis, riffing off the standard persona of a smooth TV talk show host, while also bringing the baggage of his comedy background. 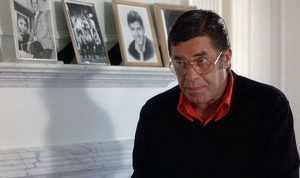 I first saw The King Of Comedy in the early ’90s, before I was more familiar with the other works of both Scorsese and De Niro. I’m not sure if I’d even seen Taxi Driver at that point, so I didn’t have as much to compare it to as I do nowadays. I loved it, and when I started to see more classic pieces of cinema I started to worry that if I ever revisited this particular movie then I would end up disappointed. Thankfully, that wasn’t the case. The King Of Comedy is a film that stays just as compelling and interesting with every viewing. 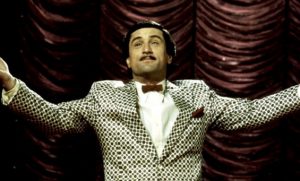 If you’ve not yet seen it, do yourself a favour and get to it. I hope, like me, that you won’t be disappointed.