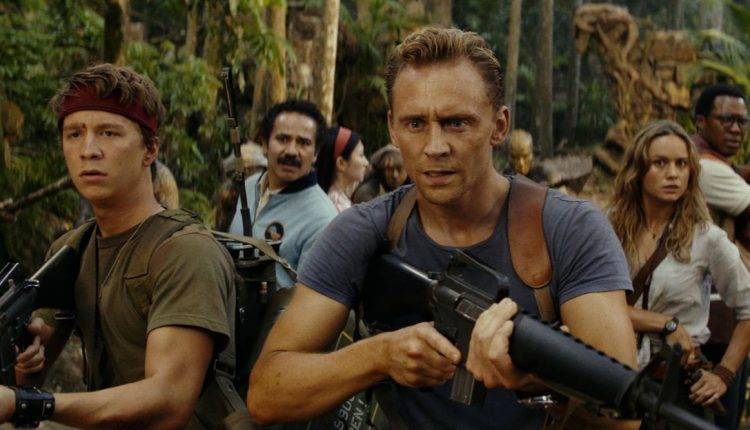 More than a decade after he was last spotted dangling from the Empire State building in Peter Jackson’s courageous remake, King Kong comes roaring back onto our screens in Kong: Skull Island. With Legendary Entertainment firmly fixed on a plan to create a shared MonsterVerse, there’s a hefty weight of expectation resting on the giant gorilla’s double decker-sized shoulders – especially after Gareth Edwards’ po-faced Godzilla landed with a thud in 2014. And while Jordan Vogt-Roberts’ reboot still has some considerable flaws, it’s a deliriously entertaining survival movie that represents a massive ape-sized step in the right direction.

After what turns out to be a typically bonkers prologue set at the tail end of World War Two, we skip ahead to 1974 where retreating American troops are preparing to high-tail it out of Vietnam. But before his squad can return to their homes and families, Samuel L. Jackson’s battle-hungry Lieutenant Colonel tasks them with one final mission to lead a rag-tag team – including Tom Hiddleston’s tracker, Brie Larson’s war photographer and John Goodman’s shady Monarch scientist – on a dangerous expedition to a previously uncharted island.

Though Vogt-Roberts (The Kings of Summer) frequently apes Apocalypse Now’s hallucinogenic visuals and haunting search for a misunderstood enemy, Kong is not a movie that takes itself too seriously – which is frankly a must when one of its standout set-pieces sees Hiddleston go full Fruit Ninja on a swarm of mutant birds while wearing a gas mask. From the moment the psychedelic 70s soundtrack kicks in and the island swoops into view in a cacophony of explosions, we’re firmly in schlocky monster movie territory where quips are fired as frequently as bullets and the next slickly choreographed action sequence is never too far away.

Naturally, it’s the titular giant ape who is the best thing in this wayward war movie. Measuring a towering 104 feet – and still growing – this is easily the tallest iteration of the classic kaiju yet, but he’s also the most tangible. The special effects team have worked wonders to add a sense of tactility to Kong’s mattered fur, flared nostrils and pained eyes – for the first time you almost believe that a giant gorilla could actually exist. He’s also got greater depth, with screenwriters Max Borenstein, Dan Gilroy and Derek Connolly reimagining Kong’s backstory to make him the last of his species after his family were wiped out by a natural predator.

It’s not just Kong that the new arrivals have to worry about, though. A whole ecosystem of nightmarish super species – including spiders, stick insects and squids – exist to terrorise the human explorers and make them wish they had stayed on the boat. By far the most frightening are the Skullcrawlers – giant, two-legged lizards with skeletal heads who emerge from underground to wipe out all life on the island. It’s when these giant monsters are doing battle that this movie really clicks into gear.

If only the humans could match their beastly co-stars. Despite assembling a star-studded cast, the leads are lumbered with redundant archetypes – the cowardly corporate drone, the gung-ho military man, the crack-pot scientist – who feel like sketches rather than fully-formed characters. Only John C. Reilly makes a lasting impression. Playing a marooned WWII pilot, he adds plenty of comic relief but also has hidden depths as the prospect of rescue leads him to wonder about what will remain of his past life should he finally make it home.

There are other flaws, too – namely a plot which feels predictably derivative – but it’s undoubtedly a step-up from Godzilla. It seems Vogt-Roberts has learned from Edwards’ mistakes, injecting much-needed levity to proceedings and upping the action quota substantially – crucially, the titular monster is this time introduced before the opening credits. Michael Dougherty is next line to take a crack at the burgeoning series. If he can create stronger characters and build a more imaginative narrative around them, perhaps Godzilla: King of Monsters can be the one to finally nail the modern monster movie blockbuster.