Teenage dreams, delusion and denial are often at the heart of Edinburgh International’s ‘Teen Spirit’ strand and Akseli Tuomivaara directed Korso is no exception, as a film about small – town dreams and harsh realities in Finland. The film follows the path of 20 year old Marcus and his plans of moving to New York to pursue street –ball fame. However with little money behind him he turns to the local loan shark in a last ditch attempt to escape his rut. When the local loan shark finds out Marcus has no intention of paying him back, things take a turn for the worst in a journey into criminality, betrayal and the inevitable clash between teenage ambition and reality. 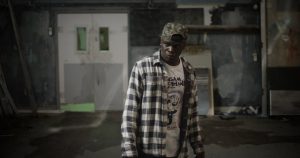 Pitting the teenagers stale lives against the light starved, almost post – apocalyptic environment of Helsinki is a pivotal stylistic move for Korso and even though many of the characters themselves are quite repulsive in their sexist and racist ways, it’s hard not to become involved with Marcus’s own journey which is almost Shakespearian in its tragic arc.  As a character based drama like many of the ‘teen spirit’ films, lead actor Mikko Neuvonen is incredibly versatile, evoking both sympathy and shock in several powerful scenes exploring his reactions to failure and impending change.

Although the films themes of escape and small – town repression resonate through several other films on the programme, Korso perhaps differs its exploration of characters grappling with their own dreams, painfully questioning their preferred futures and realising they may not be obtainable. Understated and realistic, with a gripping script and some truly powerful scenes Tuomivaara’s account of teen dreams was a gripping watch, tackling the dark elements of the teenage psyche and the difficult search for perspective in small town stasis.