In his new film Labour Day, Jason Reitman turns his hand to suspenseful melodrama. Everything he has done till now, which includes Thank You for Smoking, Juno, Up in the Air, and Young Adult, was dry, sardonic, and trendy. Now he goes back to 1986, and you can’t help wondering why Reitman wanted to do something that smells of B Pictures, that includes relatively conventional and familiar elements, and that you might have seen on late-night TV — in 1986. The story has an original hook to it, but is made up of many parts that aren’t. This movie holds you in its grip for its entire running time, and it’s well made and well acted, but that doesn’t mean that it’s the least bit plausible.

Labour Day has a voiceover by Tobey McGuire — Henry as an adult. As events in 1986 unfold, Henry is thirteen, played by the sweet-faced, intent Gattlin Griffith, whom we’re going to see quite a lot of. Everything revolves around Henry, and the house of cards that’s built up over this long weekend will also collapse because of of him. Henry is the loyal son of Adele (Kate Winslet, in yet another of her suffering, fragile women roles). Since Henry’s parents divorced, Adele has been so depressed she barely goes out of the house. 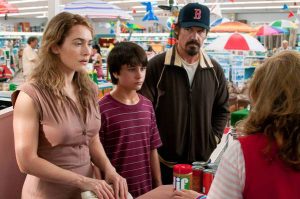 When Adele and Henry are on one of their rare trips to stock up on cheap groceries at a Walmart-like joint, they are commandeered by hunky but haggard and bleeding Frank (Josh Brolin). Frank is a bad guy — he’s just escaped from prison — but oh what a good bad guy he is! Some audience members find events that follow laughable. But though they may be preposterous, they’re also hypnotic. One watches with fascination as Frank pretends to tie up Adele, but in the days that follow wins not only her trust, but her love. There’s not much Franck can’t do — he fixes the car, the plumbing, waxes the floors, cleans the rain spouts. He makes chilli and feeds it to the tied up Adele, like a baby. He teaches Henry how to bat and throw a curve ball. Most importantly, he shows them (having untied Adele) how to make a killer peach pie, a lesson Henry will never forget, and whose sensuality can’t fail to get through to the touch-starved Adele.

Meanwhile, Frank’s escape is all over the news. This is a very small town, and neighbours, though few, tend to be nosy or intrusive. J.K. Simmons appears with food — the peaches for the pie; Henry accepts the peaches, and gets rid of him. Not so easy with Evelyn (Brooke Smith), who forces them to take care of her handicapped son Barry (Micah Fowler) for the day. Need we say that Frank trumps Henry’s somewhat lame dad Gerald (Clark Gregg), who takes him out for dinner with his stepson on Sunday, as usual? But events are closing in, even as Frank, Henry and Adele become a family unit, due to Frank’s awesome skill set and the big empty spot in Henry’s and Adele’s lives where a father and husband should be. And so as the days go by, and the first day of school approaches and Henry is to begin seventh grade, Frank and Adele plan to run off to Canada and take Henry with them. We won’t tell you what happens.

It’s not so likely that you’d believe all this anyway, but things aren’t helped by the way the movie complicates itself with sneaky, ultra-conventional-looking flashbacks to, mainly, glancingly sketch in the pre-jail life of Frank, and also, to confuse matters further later on, fill us in on Adele’s nightmarish efforts to have another child after Henry. (There is so much about sex in this movie, and yet it seems strangely leery of sex. When Adele and Frank get it on, Henry doesn’t hear anything but muffled voices.) Though he’s virtually in hiding, Henry gets out enough to repeatedly meet up with a sophisticated new girl in town his own age he’s just met, from Chicago, Eleanor (Brigid Fleming) who regales him with a wealth of horror stories about parents abandoning their kids. I wouldn’t give up the sly Eleanor, who brings the movie’s only light and witty moments and adds to our sense of Henry’s personal perspective. But the way Reitman’s screenplay crams everything from Joyce Maynard’s novel into the small space of the film can only confuse and mitigate the one good thing it has going for it — its slow-burning claustrophobia and tension. 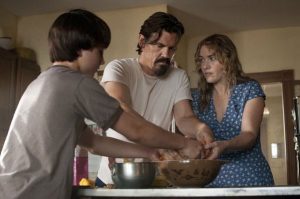 Despite a little bevy of secondary characters including bank employees, cops, shop clerks and the various neighbours, we’re stuck pretty much with Winslet, Breslin, and young Gattlin Griffith. It’s hard to get a handle on Breslin’s character, or on Breslin himself. Despite his career boom since No Country for Old Men, with gigs from the mad revenge figure of Oldboy to Dan White to George W. Bush, who is he really? “Does he have charisma?” asks Eleanor, when she realises Henry and his mom are harbouring the escaped convict. “He might,” says Henry. But he also might not. As for Kate Winslet, she excels in what she has called “ballsy” characters, and is wasted doing a soppy depressive lady like Adele. I was grateful for the boy, because he’s a fresh face. His Henry seems always to care, and care intensely.

It’s a tossup whether this is an intriguingly odd story or an absolutely ridiculous one, but weight tends to shift to the second possibility after you have time to think. On the other hand drab people being seduced by somebody wicked is a classic movie theme, and such odd romances do occur. It’s just hard to make a convincing film out of them, and this narrative is too static to deliver the genre pleasures of a film noir. You wouldn’t expect Jason Reitman to produce an absolute clinker, and Labour Day isn’t quite that. But it does feel like an odd misstep.