The Lair Of The White Worm is bonkers. I mean that it’s properly mad, at times almost unbelievably so. It’s also a genuinely great British horror movie that came out at a time when there weren’t that many great British horror movies being made/released. Part of its charm lies in just how British it is. Of course, a large part of its charm also lies in the slinky, sexy, unforgettable turn from Amanda Donohoe, but we’ll get to that shortly.

The story concerns a village in the English countryside that continues to celebrate a legend of old, a tale of a renowned local who took up a sword to slay a giant worm (or wyrm). Yet, despite that event happening so many years in the past, things start to occur that make some people eventually suspect that the beast is back. Perhaps the legend wasn’t as fictional as local legends so often are. And perhaps it’s somehow tied to the sexy, and decidedly odd, Lady Sylvia Marsh (Amanda Donohoe). Two sisters (Catherine Oxenberg and Sammi Davis) still hoping to find the parents they lost the previous year certainly start to suspect the Lady, and they’re joined by a Scottish archaeologist (Peter Capaldi) and Lord James D’Ampton (Hugh Grant), the ancestor of the local legendardy worm-killer. 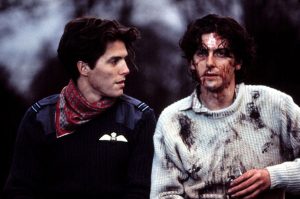 Written and directed by Ken Russell, this has everything that you’d expect from the famous enfant terrible. There are hallucinatory images, moments of blasphemy, a heady mix of sex and pain, and a script that mixes in some great ideas with occasionally clunky lines of dialogue. 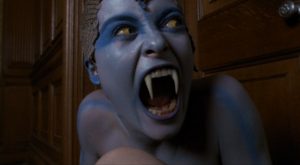 The cast is a real mixed bag. Grant is very good, as is Capaldi, but the star of the show is most certainly Donohoe, giving a performance that seared itself upon my teenage brain when I first saw this movie in the mid-1980s. Oxenberg and Davis are, it has to be said, pretty weak, but they do just enough to avoid sinking the whole movie. Or, more accurately, Russell knows when they’re required and when he can move back to the magnificence of Donohoe. 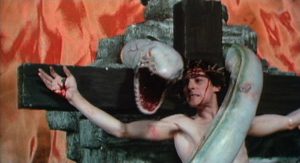 Based on a novel by Bram Stoker, which I haven’t yet read, this is an interesting variation on typical vampire fare. Using the titular worm, the legend and mythos created within the movie is both interesting and detailed, and also left vague enough to fire up the imagination of viewers.

There may be many people, like myself, who remember this as a real curio piece, an off-the-wall horror with an off-the-wall central performance to match. While that’s fair comment, it also holds up as an impressive piece of work. There are one or two fantastic jump scares, a pervading atmosphere of unease and, as I may have already mentioned, Amanda Donohoe. This is at the top of my wish list when it comes to movies that should be getting the hi-def treatment from the likes of Arrow Video.