Lean on Pete is about a boy who lives in the Pacific Northwest, a big change from Andrew Haigh’s previous two features about couples, young and gay, old and straight, set in England. In a way, Lean on Pete, from a novel by musician and writer Willy Vlautin, is like something by S.E. Hinton – a hardscrabble tale of a kid out of his depth. Hinton’s kids, though, were with other kids, and this boy, Charley Thompson (Charlie Plummer), only fifteen, winds up on his own with a horse called Lean on Pete, on the run across the West searching for family. If it was an S.E. Hinton story he’d have been stuck in Tulsa. Hinton would have been out of her depth crossing the West, and sometimes it feels as if Haigh is. But the journey is exciting and emotional and delivers some tough truths.

Abandoned by his mother when he was a few years old, Charley has a nice, but irresponsible father, Ray (Travis Fimmel), whose women have caused him and Charley trouble – including a big fight with Charley’s aunt, a rift that becomes a serious snag later on. School’s out, and Charley finds a job at a large stable, so quickly it’s evident the man doing the slapdash hiring, Del (Steve Buscemi), who races horses, is rather disreputable. Del’s only evident sometime staff member is Bonnie (Chloë Sevigny), who jockeys for him occasionally. 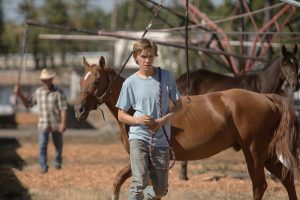 I have seen disappointment from viewers that Del and Bonnie disappear from the narrative. I was not sorry to see them go. Buscemi doesn’t seem like a real person and Sevigny doesn’t seem like a real jockey. There is not this problem with Charlie Plummer, a wonderful actor who is tall and engaging and fills the screen. He’s big enough for it to be in the plot that he played freshman football. Plummer, who got slighted as the young J. Paul Getty III in the ill-starred All The Money in the World, gets his due here, in a big role. He seems super-real, saintly-sweet, tough, with a heart as big as the mountains. He is so charismatic and emotionally present he reminds one of River Phoenix – a model to live up to.

The title’s a tricky one, which you think will be about leaning on someone, or a guy named Pete. Then you think it’s about a boy and a horse. Ultimately that also is untrue. After a short adventure with Del and the horses, circumstances become desperate for Charley, and also, he finds, for Lean on Pete, “Pete” for short. Charley learns this hard-knocks lesson of horse racing that is not, you may be sure, the Triple Crown level: when a horse stops winning races, his life is over. Del gives up on Pete, who has a hurt leg, and is going to sell him down to Mexico, where he’ll be slaughtered. Charley, who is literally doing a lot of running when we first see him, does a runner. He gets out of town, and saves Pete.

This leaves them both in a very dicey situation. Charley runs into various people on the road, including, to start with, a friendly but dangerous drunk named Silver (Steve Zahn) who takes him in. 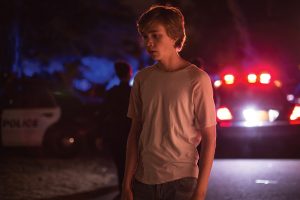 This movie is so simple and pared-down and Young Adult-ish you wonder what possessed Andrew Haigh to make it. Perhaps to show off Charlie Plummer, and to experience the American West and Northwest. Lean on Pete is like a lot of other movies about a boy and hard knocks and a beloved animal and an adventure. Except that it is so much better than most of them. It’s pretty long. But then, it must take a good while for Charley to get where he’s going. It isn’t easy. And when he’s there, it’s not easy either.

There is texture in every scene of Lean on Pete and Charlie Plummer makes it all memorable. Younger viewers, or those with short memories who have forgotten the youth pictures of the Eighties and how good they were, are advised to find and watch Tex (Tim Hunter, 1982), The Outsiders (Francis Ford Coppola 1983), Rumble Fish (Coppola 1983), and That Was Then, This Is Now (Christopher Cain 1985), all of which are adaptations from S.E. Hinton novels with casts studded with young stars. See The Outsiders and you’ll see why there was a “Brat Pack.” Note to myself: take a look at the novels of Willy Vlautin.

Lean on Pete, debuted at Venice Sept. 2017, where it won Charlie Plummer the Best Young Actor award; in about 20 other festivals including Telluride, Toronto and London. It’s released in UK cinemas 4th May.