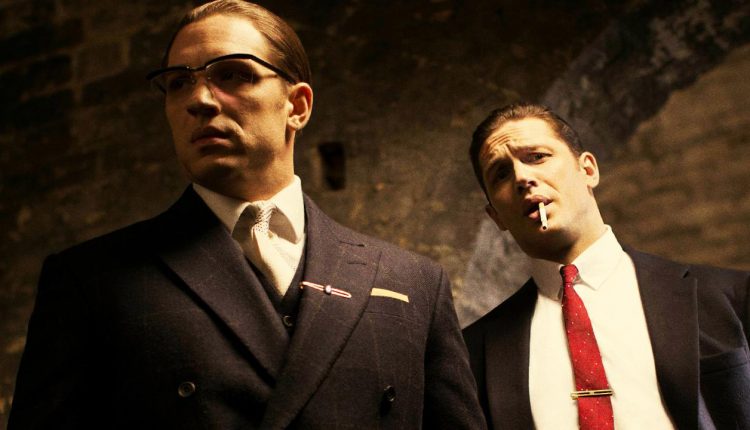 Through his varied filmography, Tom Hardy has made himself out to be quite the cinematic chameleon.  Ranging from sci-fi and comic book villains to a renegade police officer and an MMA fighter, he has proved to critics that he can pull off any role.  But his latest film, directed by LA Confidential screenwriter Brian Helgeland, sees him pull off his biggest challenge to date: play notorious gangster twin brothers Ronnie and Reggie Kray.

The film essentially portrays the relationship between the Krays as a ying/yang dynamic: Reggie maintaining a charismatic facade while leaning towards entrepreneurial ventures while the deranged Ronnie is easily goaded into violence and moments of madness.  As the film progresses, Reggie sees his self-control drastically slip – exacerbated by his brother’s senseless actions – and, despite a ray of hope in Reggie’s relationship to innocent, doe-eyed Frances, it feels like the twins’ gangster lifestyle is doomed from the start.  The crux of the problem is highlighted during a meeting between American mobster Angelo Bruno (Chazz Palminteri), who implies that Ronnie needs to ‘disappear’, is met with the age-old defence: “He is my brother,” highlighting the co-dependency of the Kray brothers – one cannot exist without the other.

Despite it being a seemingly conventional British crime film, all Cockney accents and beatdowns, everything about Legend fits the era.  Glamourising the tough streets of East End London, the costumes, style and street locations are accurately recreated and Helgeland draws on his strengths as a crime film screenwriter with a sharp and occasionally witty script, while nicely visualising a key part of London history.

Hardy adds another string to his bow by effectively playing both brothers and creating two separate characters at the same time.  Reggie is cool and collected, whereas Ronnie is comedic yet demented and Hardy portrays both with enough distinction between the two to avoid confusion.  Supporting characters such as Browning, David Thewlis and Colin Morgan, play their parts well but at the end of the day, it is the Tom Hardy show.

Overall, Legend is chaotic, fast-paced and visually impressive, with Hardy delivering his best performance to date.

Legend is out in UK cinemas from Friday 9 September.