A writer’s output is usually far more interesting than their life. Attempting to summon up a biopic for the men and women of letters offers good sport and mixed results. For every Shadowlands there’s a vapid Tolstoy or Beatrix Potter adaptation promising lush period detail and zero insight. This time the unlucky victim is Enlightenment poet, essayist and philosopher Giacomo Leopardi. When after two and half hours, Leopardi still hasn’t got past its hero’s humpback as his number one distinguishing feature, you know it’s a washout. All the ballrooms and fancy hats in the world can’t hide the fact that Mario Martone’s film spent so much effort trying to look ravishing it forgot to be interesting.

After a brief foray into his childhood years, Leopardi picks up with the fragile young writer on the cusp of adulthood. Elio Germano plays him as a man stifled by his small town life. He begins correspondence with Pietro Giordani (Valerio Binasco), the man who becomes his mentor and whom his father (Massimo Popolizio) fears will lead him away from the conservative principles that underpin their family ideals. Leopardi bucks against this but remains put for some time until we leap a decade into the future and follow him as he achieves halting success and ever fading health.

The opening exchanges promise an entertaining, if empty, period piece. With such complex literary output, it’s nigh on impossible for Martone and co-writer Ippolita di Majo to weave it into the film. They get no further than snippets of conversation at parties and an over-abundance of quotes from his poems. For a film about a key Enlightenment figure, there’s very little enlightening going on. 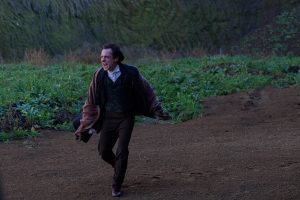 At least Leopardi’s family interactions and efforts to break from a father’s stifling rule provide enjoyable costume fare. It might not be much beyond the Downton Abbey school of period soap drama but it speeds by. The trouble comes in his later years. Leopardi’s decline makes for dull viewing. When Martone has failed to establish just why this man matters, he’s not going to convince anyone his death has much significance. Even worse, Leopardi glosses over the Enlightenment and the revolutions that were sweeping Italy at the start of the 19th Century. He seems content to film a shut-in who awakes at dinner time and totters about town getting heckled by impudent children.

Partial love interests pop by and he’s given a close friendship with Antonio Ranieri (Michele Riondino) to try and add momentum, all efforts that fall by the wayside as he stumbles ever closer to death. Even a spirited turn by Germano can only salvage glimpses of quality. Leopardi looks the part but dig a little deeper and Martone’s vessel is an empty one. Eventually dying after years of pain, he’s by no means the only one who’s just been put out of their misery.