There’s not much I can put here to sugar-coat the pill. I really didn’t like Les Gouffres. Granted, there was a potentially interesting psychological aspect to the whole movie that might appeal to some people, but it didn’t work for me at all.

The story concerns a large sinkhole, funnily enough, that requires some investigation. Georges (Mathieu Amalric) is one of the people who heads off to investigate it, leaving his wife (France, played by Nathalie Boutefeu) all alone in a South American country, with only her worry and tension to occupy her mind.

Written and directed by Antoine Barraud, this is a movie that feels very much like a riff on Repulsion, without any of the intelligence or visual style. Although it runs for just over an hour, barely scraping into feature film territory, it overstays its welcome by at least forty five of those minutes. 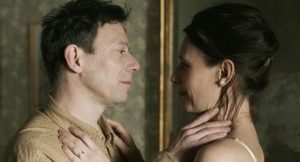 Boutefeu and Amalric can’t really be faulted, as they do the best with what they’re given, and the few other actors onscreen all do a decent enough job. No, the fault here all lies with Barraud. From the random quirkiness in the first quarter, which I admit at least kept me amused at times, to the constant out-of-focus camerawork (I don’t care what aesthetic choices you’re going for, there’s NO reason for that many shots that make my eyes hurt), to the horrible . . . . . . . . seeming pointlessness of it all.

I will be very kind, and say that there are sparks of potential here and there, but Barraud doesn’t use them to create any decent fire. He seems content to revel in the worst kind of arty movie, the kind that feels too hollow to bear the weight of its own sense of self-importance. I don’t expect films to always give me all of the answers, or to even make sense sometimes, but I expect any movie that tries to challenge me to be worth my time, which this most certainly wasn’t.

It’s not beautiful enough to impress me as a piece of cinema fantastique, it’s not interesting enough to impress me as a psychological drama, and it doesn’t effectively weave those two main strands together. I’m sure that anyone who falls in love with the movie will be able to assume that any detractors just didn’t “get” it. I think that I did “get” it, as the fancy dressing covers up quite a simple core, but I just didn’t care for it.