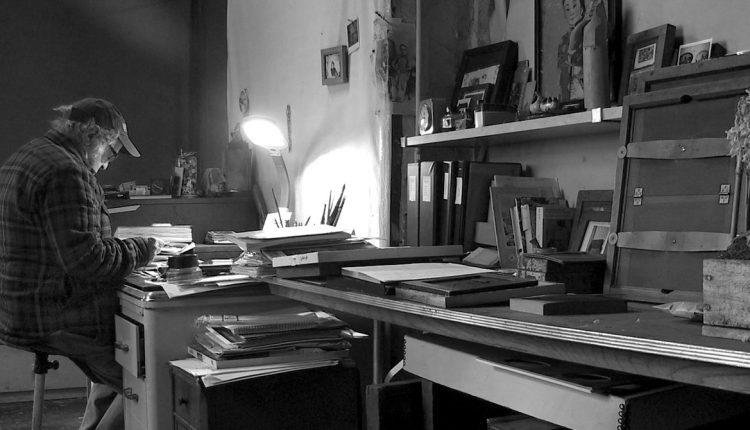 The London Film Festival has always had a good line in biographical documentaries, particularly of artists. Previous years have given us For No Good Reason, Charlie Paul’s attentive film about Ralph Steadman, or last year’s Nicola Costantino: La Artefacta, the remarkable film about the Argentinian provocateur by Natalie Christiani. What both of these films had in common beyond being merely biographical was that the filmmaker’s had an intuitive understanding of their subjects. Whether it was Steadman’s cheeky anarchy or Costantino’s unending quest to find herself within her art, both films knew exactly which methods and routines to invoke in order to allow the artists speak entirely for themselves.

Following on in this tradition is this year’s fantastic Don’t Blink – Robert Frank, a loving, perceptive and deceptively savvy biography of one of the 20th Century’s most interesting and singular photographers. Told through interviews with Robert Frank himself and his numerous collaborators and subjects over the years, and featuring many fantastic shots of Frank at work and the works themselves, including his little seen film work, Don’t Blink is a fitting retrospective of an artist who has done so much to shape his own art and times and yet does not seem to have received the mainstream attention that others have done.

Directed, produced and written by Laura Israel, nobody else could have been entrusted with the task of making a film about Frank, because there is probably nobody else who knows the man and his work quite as well. Israel has been working with Frank as his editor for the last twenty years. And this knowledge comes through in the film, in the way that Frank, usually a pretty ornery guy, opens up to discuss at length not only his own times and achievements, but those of his influences and the people around him. People he was very a part of but also fundamentally separate from.

Robert Frank has become known as one of the great American photographers, one of the great photographers of America, though he was born in Switzerland, emigrating to the United States in 1947, arriving just as the American post-war creative underground was beginning to find its voice. And it would go some way to finding its vision in Frank’s seminal 1958 work, The Americans, undertaken with the aid of another great American photographer, and Frank’s main creative source of inspiration, Walker Evans. The Americans is still hailed today as one of the great works of photographic social anthropology, and its influence can be felt throughout the film.  It is not all that this film is about though.

We see interviews with Frank from all eras of his remarkable career; from his time as a travelling photographer of people to his time as an avant garde filmmaker rubbing shoulders with the likes of Allen Ginsberg and William Burroughs, stopping briefly to look at his work as work as a fearless and controversial biographer himself, with some wonderful scenes of his little seen and oft banned film about the Rolling Stones, Cocksucker Blues.

All of this is laid against the backdrop of a man coming to terms with being an interloper in a land that has welcomed him and with which he is enamoured but from which there will always be a slight cultural distance. It is no surprise that throughout his time as an artist Frank has been associated with some of the greats of the American post-war creative scene. His early films featured Jack Kerouac, Allen Ginsberg and William Burroughs, his later films owe a debt to and are of a kind with the great American archivist and filmmaker Harry Smith, who makes an all to brief appearance here.

There is an infectious energy to Don’t Blink, spurred on probably by the seemingly endless creative drive of Frank, much as there was in For No Good Reason. Time has not dulled either of these icons’ wit or desire. We can see from the shots of an aged Frank flicking through his immense collection of post-cards, while his wife laughs and chatters away in the background, that a fundamental love of the image, whether it be photographic, graphic, or moving, will inspire Frank to photograph the world around him. And now, in his 90s, the legacy that Frank has left behind, a legacy tied in with the very picture of America he has helped shape for the last 70 years.

Don’t Blink – Robert Frank is a fantastic film, for lovers of history, the arts, documentary, culture and counter-culture. There is so much here to entertain and to inform, and it is a wonderful tribute to a truly great, one-of-a-kind photographer.