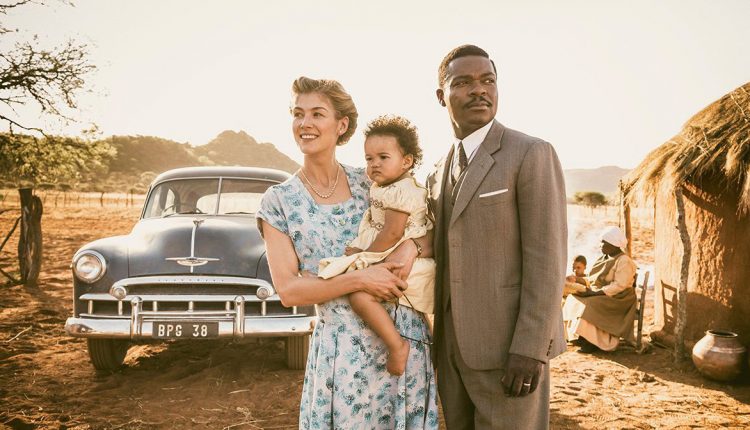 In 1947, Englishwoman Ruth Williams fell in love with Seretse Khama, the prince of the then-British protectorate Bechuanaland in Africa. Their union gained controversy in Britain and Africa, which saw Seretse being denied his birthright as King of Bechuanaland.  Despite political and social opposition against their marriage, the Khamas eventually overcame their exile from Africa to become the first President and First Lady of the newly independent Botswana in 1966.

Their relationship is the basis of A United Kingdom, the latest film by Belle director Amma Asante. With a screenplay based on the book by Susan Williams, the feature follows the romance between Seretse (David Oyelowo) and Ruth (Rosamund Pike).

A key problem with A United Kingdom is that the theme of racism and how it is a factor in social and political situations is not delved into in enough detail. Seretse’s racial discrimination in the UK is as quickly experienced as it is brushed aside, while Ruth’s difficulties into adapting to life in Africa are more profound. The film is lacking in exploring the emotional turmoil with their respective struggle for acceptance, instead of building an idealistic view on how to overcome adversity that is resolved too fast and easily.

However, the audience is reminded that the focus of A United Kingdom is the relationship between Seretse and Ruth. Guy Hibbert’s screenplay flows well and doesn’t distract viewers from the Khama’s emotional conflict, while Sam McCurdy’s cinematography reflects the coldness of post-war London and the bold vibrancy of Africa. The cast is also great – Oyelowo delivers a strong, engaging performance; Pike’s fragile beauty is a great foil for Ruth’s strength and determination; whereas Jack Davenport is great as dastardly Alistair Canning.

With its solid performances, Asante’s direction and Hibbert’s screenplay, A United Kingdom is a beautifully told love story but its melodramatic tones simplify what was a historically complex relationship.