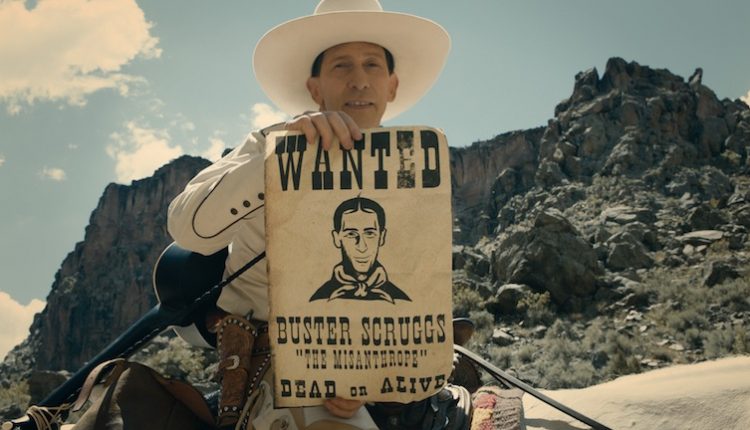 The Coen brothers have never failed to surprise audiences with their myriad of filmmaking styles. But their more acclaimed features tend to fall between the quirky comedy (The Big Lebowski, Fargo, The Ladykillers) and the intense drama (True Grit, No Country for Old Men, A Serious Man). So, what would happen if there were to create an A-Z of their filmmaking talents? You will get their latest feature – a Western anthology set in the American Frontier.

Originally planned for a TV series, the film is an onslaught of different tones that change from the jovial to the macabre. As each story only lasts a short period of time, their narratives don’t have long to fully develop the characters involved and as they are seen as the driving force of the film, they need to make a lasting impression.

Some of them do – Tim Blake Nelson’s sharp-shooting songbird Buster Scruggs, Stephen Root’s loquacious bank teller and Jonjo O’Neill’s sinister Englishman stand out in their respective stories but other ensemble members such as Neeson and Franco are notably dull in comparison. However, two surprise castings are worth a mention. Better known as Dudley in the Harry Potter series, Tom Melling plays a quadruple amputee who is ‘used’ to entertain remote towns with eloquent soliloquies but is unexpectedly silent in his turmoil, while The Big Sick‘s Zoe Kazan is a young woman who faces an uncertain future as she traverses across the Oregon Trail. The talents of both actors are evident through their expressive performances, as they bring a sensitivity and depth to an otherwise gruff film.

Considering The Ballad of Buster Scruggs starts with a strong dose of comedy, the dramatic tonal change is offputting as it makes it harder to label. With careful direction and stunning cinematography of New Mexico and the Nebraskan Panhandle, the Coens effectively take audiences through a weathered path to offer six very different narratives. This keeps audiences entertained in a variety of ways so it is ultimately not your typical Western, nor is it a typical Coens comedy – it is something a lot more, and is sure to appease any Coens fan.

Combining their trademark wit with comedic violence and tense drama, The Ballad of Buster Scruggs is a delightful return to form for the Coens, which only serves to highlight what they enjoy making – not to mention their filmmaking talents.

The Ballad of Buster Scruggs will be available on Netflix from 16 November 2018.