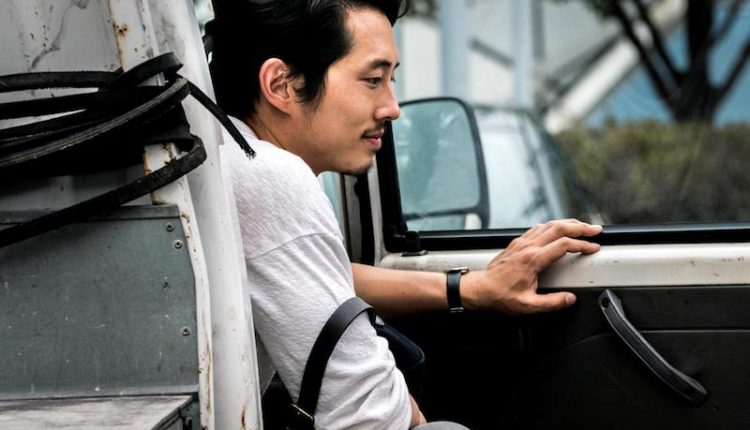 Over the last couple of years, Korean-American actor Steven Yuen has quietly made a name for himself. After he left the Walking Dead in 2016, he has starred in action horror Mayhem, acclaimed drama Okja and this year’s crazy sci-fi comedy Sorry to Bother You. His latest role sees him star in a mystery drama by Lee Chang-Dong, which won the FIPRESCI Prize at this year’s Cannes Film Festival.

Burning follows aspiring writer Jeng-su (Yoo Ah-in), who unexpectedly reunites with childhood friend Hae-Mi (Jeon Jong-seo) before she goes on a trip to Africa. When she returns to South Korea, she appears with the charismatic and wealthy Ben (Yuen), causing Jeng-su to become jealous. This quickly becomes concern when Hae-mi mysteriously disappears without a trace.

At first glance, Burning comes across as an awkward love triangle – loner Jeng-su versus the dashing Ben, with Hae-mi in the middle. Despite her good looks, her need to be noticed and admired only fuels a sense of insecurity that inadvertently antagonises a jealous Jeng-su. During this first act, Chang-dong and Oh Jung-mi’s screenplay delivers awkwardly aimless moments and conversations that subtly hint at Ben’s darker side.

It is easy to dismiss Jeng-su’s rivalry with Ben (a creepily wonderful Yuen in a rare Korean-speaking role) as jealousy, which is not helped by the latter’s looks or wealth. Instead, it is Ben’s quick dismissal of Hae-mi’s character after she disappears and his cool detachment that arouses Jeng-su’s suspicions.  Yoo Ah-in’s determined performance sees the character transformed into an endearing hero. With very few friends and his ‘inaccessible’ parents, Hae-mi is the only one Jeng-su effectively connects and so, is quickly driven to act. His ‘investigation’ quickly shapes the film into a noir-style narrative that becomes an unexpectedly tense yet satisfying drama.

Despite the uneven narrative, Burning is a visually striking slow-burner of a mystery with three intriguing performances.