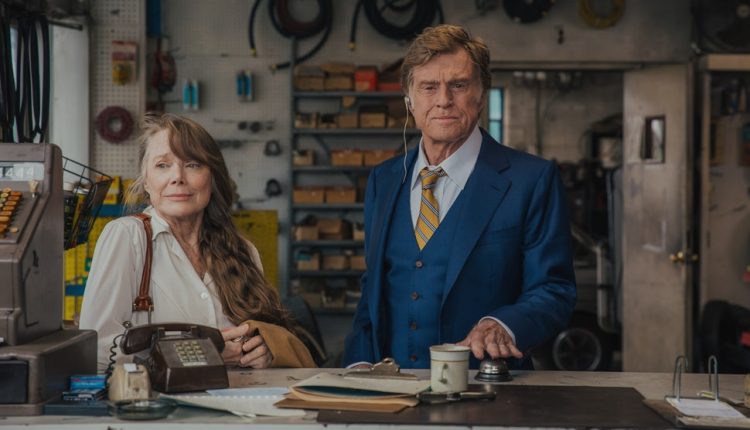 He’s a confidence man. He’s always smiling. Wearing a sharp blue suit, he simply goes up to the teller and tells them he’s taking their money. Sometimes he briefly brandishes a gun, sometimes he doesn’t – he never uses it anyway, and we never know if it’s loaded. It’s all a matter of looking the part. This isn’t just bank robbing as a means of making money – this is bank robbing as a way of life.

According to Robert Redford, The Old Man and The Gun is his last film. It’s a fitting tribute, a lovingly-made homage to his canon, most specifically his classic roles in Butch Cassidy and The Sundance Kid and The Sting. It’s sort of based on a true story: Redford plays a septuagenarian who bumps into widow Jewel (Sissy Spacek) while escaping from his latest job. Their relationship is simply lovely, two older people who just seem really glad they have found each other. Will he stop his life of crime in the name of love?

He has something new to consider now. Local cop John Hunt (Casey Affleck) is on his tail. Affleck’s performance is as mumblecore as Redford’s is gentlemanly, doggedly solving the case in a permanent sense of bemusement. Just like Tucker, Hunt loves his job. Now he has the perfect criminal to catch: a nice guy. Their relationship plays something like Heat or Killing Eve, a cat-and-mouse chase that is based as much upon mutual appreciation as it is doing the right thing. Just don’t expect any real drama: this is basically hygge in cinematic form.

It may be set in the early 80s, but it apes the visual style of 70s cinema – using grainy footage and neat reverse shots – helping to enhance the movie’s nostalgic feel, especially as this time was during Redford’s peak. In one stunning sequence near the end, we are shown all of Tucker’s 16 prison escapes, a montage sequence doubling up as a celebration of the legendary actor. Possessing charm in spades, the 82-year-old Redford looks like he is having the time of his life, giving the film a highly relaxed, soothing quality.

Upon closer inspection, The Old Man and The Gun is pretty flimsy. There are many plot threads that are never followed up on, the supporting characterisation is often threadbare and there are about seventeen endings stacked on top of each other. But this is testament to the charm of the movie, which is as easygoing as its protagonist and seems to flow like one of his stories, picking up on different tangents seemingly at random. The plot is an afterthought, with major events seemingly happening between scenes. Yet at just over 93 minutes, this is hardly any matter, as The Old Man and The Gun would rather just give Redford one more rodeo than shoehorn him into any generic fare. With the vibe of a testimonial football game, you’d be hard pressed to find a better send-off to one of the greatest actors of all time.