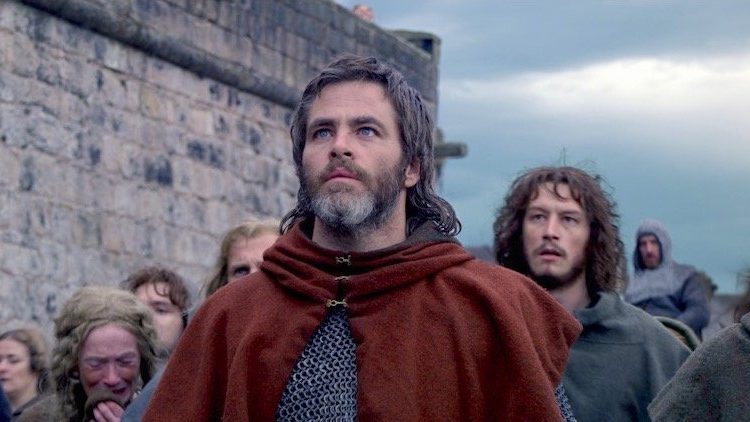 In 2016, Scottish filmmaker David Mackenzie directed a Black List script by Taylor Sheridan. Starring Jeff Bridges, Ben Foster and Chris Pine, Hell or High Water became one of the American Film Institute’s Top Ten Films of the year and a multi-Academy Award nominee. Two years on, Mackenzie has reunited with Pine, as well as returned to his native Scotland, for his latest film.

Outlaw King retells the story of Robert the Bruce (Pine) and the start of his reign as King of Scots, which includes the war of liberation he wages against King Edward I of England (Stephen Dillane) and his son Edward II, Prince of Wales (Billy Howle).

Scottish historical dramas have had a history of being ‘plagued’ by inaccuracies. Academy Award-winning film Braveheart has been slated for its historical inaccuracies about William Wallace, and upcoming Saoirse Ronan drama Mary, Queen of Scots has been labelled as ‘problematic’. With ongoing concerns about the depiction of Scottish history, this raises the question – will Outlaw King suffer the same fate?

While a portion of it is historically accurate, this urge to adhere to established sources and tell audiences what really happened surpasses the aim of creating an engaging feature. With a collaborative screenplay featuring minimal dialogue, Mackenzie relies on combat and action rather than sentimentality to drive the story – a move that deprioritises character development and expression, leaving most of them as one-dimensional, emotionless figures.

Aside from the uneven accent, Pine offers an uncomplicated performance as Robert the Bruce. Dedicated to Scottish independence, his unflustered demeanour shapes him as a fearless warrior and a strategic leader. In comparison, Billy Howle’s Edward II is so desperate for his father’s acceptance that despite his merciless, he is ultimately blinded by his own insecurities. Luckily, Florence Pugh and Aaron Taylor-Johnson are on hand to save the day. The latter delivers a delightfully unhinged performance as Robert’s lieutenant James Douglas, while the Lady Macbeth star’s impressive performance as Bruce’s fierce, strong-minded wife Elizabeth offers more complexity and depth than most of her male co-stars.

Despite Outlaw King comes across as style over substance, the visuals and direction cannot be faulted. In addition to the impeccable single-shot introduction and Barry Ackroyd’s stunning cinematography, it is the graphic violence that really captures the audience’s attention, as it conveys the horror and ruthlessness of Scotland’s enemies – and emphasises the need for Robert to succeed.

Overall, Outlaw King offers great visuals and a handful of wonderful performances but is hindered by poor dialogue and its simplicity.

Outlaw King will be available on Netflix from 9 November 2018.