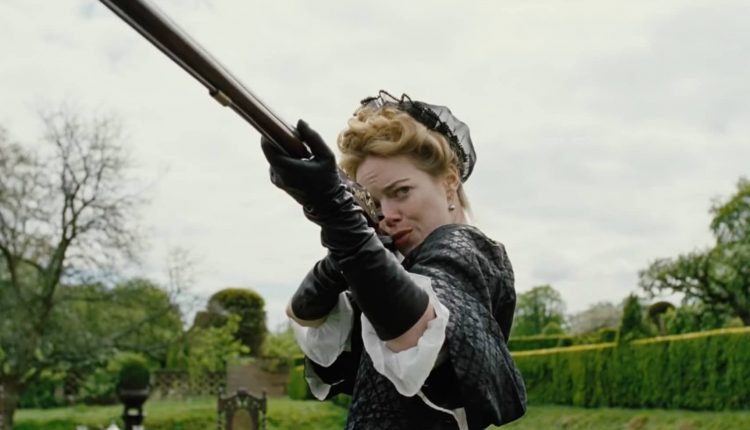 It seems par for the course for American actresses to take leading roles in costume dramas set in Europe – think Gwyneth Paltrow in Emma (1996) or Kirsten Dunst in Marie Antoinette (2006). Now Oscar winner Emma Stone follows suit by appearing in director Yorgos Lanthimos’ new historical romp The Favourite, which takes place in the 18th century British court of Queen Anne. And a pretty good job she makes of it too.

England’s Queen Anne (Olivia Coleman) is not all there. With her court favourite Lady Sarah Marlborough (Rachel Weisz) – who acts as royal consort in all but name – to all intents running the country, Anne is left to idle her days in isolated splendour, with little to concern herself over than the fate of her beloved pet rabbits. Things take a turn for the worse for Sarah however when her distant relation, the young and socially eager Abigail (Emma Stone) arrives to work at the palace. It’s not long before Abigail ingratiates herself with Anne, and Sarah begins to realise her position as the queen’s favourite is no longer the given she once thought it was.

There is plenty in Deborah Davis and Tony McNamara’s story to ensure few dull moments in this film’s two hour running time which, for the most part, rollicks along like some ribald Hogarth painting brought to life. Nothing is off limits here as all court life is laid bare – quite literally in some cases. From its depiction of the period’s blunt and straightforward attitude to sex, to up close dissections of various diseases, illnesses and often unsavoury appraoches to hygiene and personal cleanliness, the film leaves very little to the viewer’s imagination. Which is not necessarily a bad thing. Though its frankness is, at points, hard to take, its onscreen visualisation without doubt adds spice to a period in history of which many people’s only experience exists though rather more restrained lessons at school.

It helps of course that the film looks the part. Shot on location at the beautifully appointed Hatfield House in Hertfordshire, there is no detail out of place. From endless corridors patrolled by silent footmen and shadowy bedrooms lit by candlelight and the glow of open fires, to the sweeping grounds where Sarah and Abigail play an often bloody version of clay pigeon shooting using real birds, the film’s reproduction of 18th century privileged life is faultless, even if a little less than appealing in all its grimy glory.

Though American, the consummate Ms Stone passes herself off effortlessly as the social climbing aristocrat Abigail, alongside a cast including the cream of the contemporary British acting fraternity. Besides Colman – who puts in a chillingly believable turn as the dotty queen – the remaining cast including Weisz, Mark Gatiss and Nicholas Hoult, make for a wonderfully nasty gaggle of grotesques, perfectly at home within the backstabbing setting of court life.

No one does period drama better than the British, particularly when produced by the likes of Film4 – one of the companies behind Lanthimos’ film: in their previous incarnation as Channel Four Films, the company produced the similarly wry take on the life of George III in the Oscar winning The Madness of King George (1994).  Similarly The Favourite‘s warts and all approach to regal history makes for a refreshing change from the sanitised versions so often produced by big budget, Hollywood cinema.