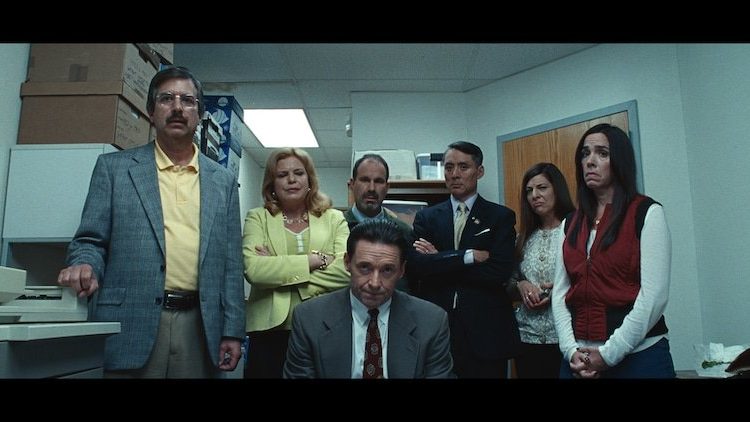 Inspired by real-life events, Bad Education is a comedy-drama starring Hugh Jackman and Allison Janney. Jackman portrays school administrator Frank Tassone who discovers his deputy Pam Gluckin (Janney) is stealing money from public school funds. But thanks to persistent student reporter Rachel (Geraldine Viswanathan), it turns out that Pam is the least of his worries.

Despite its real-life significance, Bad Education offers a light-hearted tone that makes it come across as a conventional school comedy. Frank comes across as an attractive, popular school administrator who takes the time to know his students. His disarming personality initially provides the comfort of a reliable protagonist so he becomes the key character to help guide the narrative. However, this importance and reassurance quickly fade as Frank’s involvement comes to light, revealing his own sociopathic ways to prevent further disclosure.

A lack of solid direction reduces the impact of this scandal so the situation isn’t taken seriously while Mike Makowsky’s screenplay also prevents Bad Education from exploring certain subplots, including Rachel’s troubled family and Frank’s involvement with dancer Kyle. This effectively stunts the narrative so the film barely covers anything else but the scandal in question.

Although it has an initial offbeat tone, Finley slowly breaks this down so each layer of the scandal has bigger ramifications. This comes through via Pam and Frank’s crumbling personas, whose belief that their respective reputations are enough to save them. As the school’s administrator, Frank feels he is responsible for raising the school’s profile in order to secure Ivy League admissions. In addition, Pam thinks that the school would not function as efficiently without her hands on the pursestrings. In hindsight, their positions hold a sense of superiority but their self-worth ultiamtely only uncover their arrogance and shamelessness.

Following his turn in The Front Runner, Jackman delivers his most dynamic role to date. As Frank, he proves that he can play the smooth-talking official whose charisma and sharp suits hide his self-serving intentions. Janney’s Pam offers occasional sass and pride in her wealth but Viswanathan comes across as underused as the persistent Rachel. Given her role in detailing and researching the scandal, her own personal journey lacks development.

Overall, Bad Education has inconsistencies in terms of tone and narrative but ultimately becomes a great vehicle for Jackman and Janney’s layered performances.