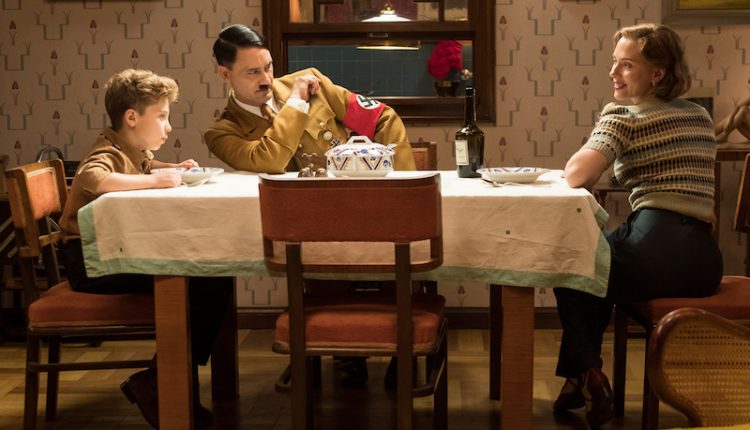 After successfully putting his unique stamp on the Marvel Cinematic Universe, Taika Waititi attempts his trickiest, most ambitious project to date – Jojo Rabbit. An “anti hate satire” through the eyes of a German child at the tail end of World War II.

Jojo (Roman Griffin Davis in a fantastic debut) is a member of the Hilter Youth. Indoctrinated to hate Jewish people, he finds himself forced to question everything he has been taught about war, hate (and love) by his imaginary friend Adolf Hitler when he discovers a Jewish girl (Thomasin Mackenzie) being hidden in the attic by his mother.

Stylistically, it is reminiscent of the work of Wes Anderson. It is full of charm, quirk, whimsy and laughs. To the point it could be snappily described as Moonrise Kingdom for Nazis.

Billed as an “anti-hate satire”, the film starts strong with the opening credit sequence of footage from excited crowds at Nazi rallies set to the tune of a German cover of I Want To Hold Your Hand. Quickly and effectively comparing the rise and popularity of the Third Reich with Beatlemania.

From that point on, however, much of the comedy is too broad to truly satirise the subject matter. Always a difficult tightrope to walk, ultimately it is one that features more than a few wobbles along the way.

When there are laughs to be had, it is very funny. Delivered with aplomb by the likes of Waititi, Stephen Merchant and Sam Rockwell (continuing his form of playing racist bigots who might not actually be all that bad really). Plus it has the finest use and delivery of the F-bomb in a 12A movie since Hugh Jackman in X-Men: First Class.

Unfortunately it is unable to nail the emotional beats when it finally confronts the true reality and horror of the situation. One particular moment should have struck a real gut punch of emotion but instead missed the target.

The hills might be alive with the sound of laughter however Jojo Rabbit is not one of our favourite things.