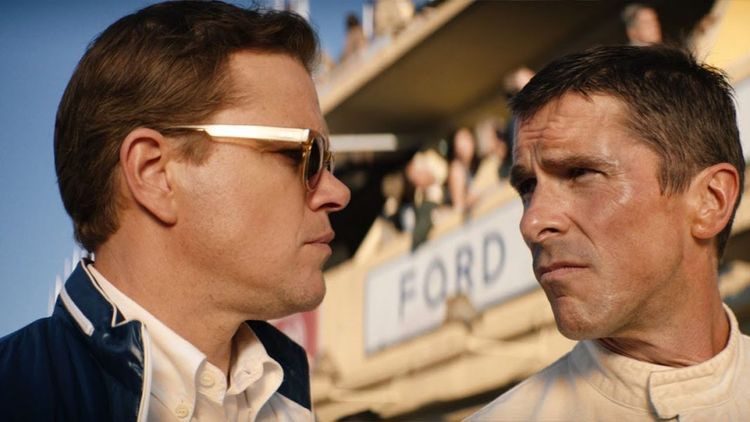 Don’t let the fact Le Mans ’66 (2109) – the new action sport’s drama by American director James Mangold – is about cars put you off. Even for non-pretol-heads, the real-life bio-pic about car designer Carroll Shelby (Matt Damon) and hot headed racing driver Ken Miles (Christian Bale) – who designed and raced a sports car for the Ford motor company in the 1966 Le Mans 24 hour car race – is thrilling stuff. A real boy’s own adventure this film quite literally puts the viewer in the driving seat, and has enough high-end classic cars on show to hold your attention even if, for you, the function of a car is simply as a means of getting somewhere.

The film is of course about the race, of which there is plenty on show. A good percentage of the film’s running time is given over to cars on the track, whether during the development and testing of the super car which Shelby and Miles create, or the Le Mans race itself which takes up most of the second half.

That’s not to say there isn’t a fair share of human drama onscreen as well, which serves perfectly to counterbalance the adrenalin pumping car action. From pit-stop backstabbing during the race (none involved were beyond bending the rules as far as they could if it meant winning) and boardroom face-offs at Ford headquarters, to the family tensions between Miles, his wife Mollie (Caitriona Balfe) and their son Peter (Noah Jupe) caused by Miles’ obsession with his sport, the whole gamut of human emotions are on display often giving the cars a tough race in the edge-of-the-seat stakes.

Ultimately however this film is about cars, and the lengths their drivers will go to to win one of the greatest sporting events designed for four wheels.