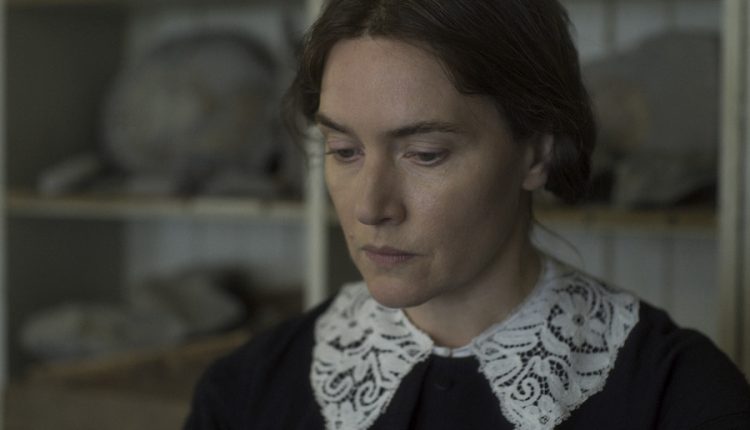 This year’s Closing Film at the BFI London Film Festival is Ammonite, Francis Lee‘s follow-up film to his 2017 drama God’s Own Country. The film stars Kate Winslet as palaeontologist Mary Anning, who embarks on a relationship with Charlotte Murchison (Saoirse Ronan).

Ammonite starts with Mary looking for fossils. Despite her palaeontology reputation in London, she supports her and her mother Molly (Gemma Jones) through collecting and selling tourist trinkets. So when geologist Roderick (James McArdle) asks her to watch over a convalescing Charlotte, Mary agrees for financial benefit, not company.

With her social status and gender see her dismissed in higher circles, Mary comes across as resentful and emotionally closed off. As such, she spends most of her time working and distances herself from the meek Charlotte. In contrast, Charlotte seems lost without the comfort of her husband. There is an inkling of fascination between them but there isn’t enough to fuel their attraction. Therefore, their mutual solace becomes a somewhat circumstantial relationship instead of one based on affection.

Frustratingly, Lee’s narrative doesn’t take the time to slowly develop their relationship. Although Anning and Murchison were lifelong friends in real life, Ammonite fails to highlight their respective careers while hinting that there was more between them. This ultimately comes across as a forced romance with a cold connection. Unexplained plot holes such as the source of Charlotte’s mourning and Mary’s relationship with Elizabeth Philpott (Shaw) also prevent further emotivity.

However, Lee’s delicate direction offers a contrast between the dull and the refined. It visually supports the protagonists’ respective backgrounds while Stéphane Fontaine’s cinematography subtly celebrates nature amid crashing waves and candlelit scenes.

What drives Ammonite is Winslet and Ronan, as their heartfelt performances create a chemistry that easily carries the film. However, due to the bland narrative and confusing messages, it is fair to say that these actresses deserve better.

Overall, Ammonite offers a tender romance that fails to capture the heart and highlight the real-life achievements of its protagonists.