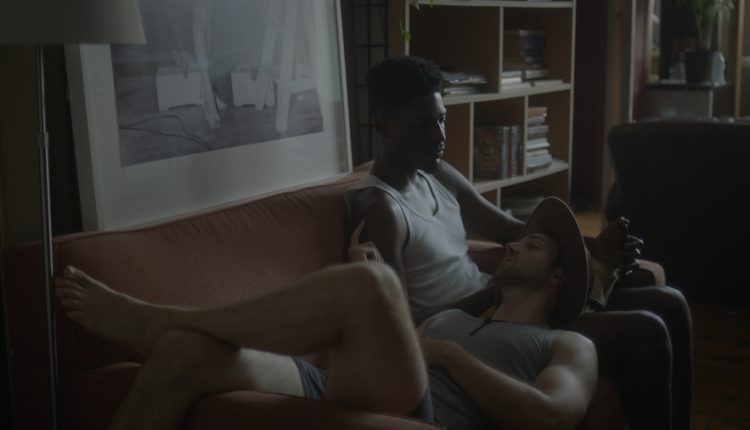 Marking an ambitious feature film debut for Matthew Fifer, Cicada sees him take on the role of director, producer, co-writer and lead actor. Inspired by true events, the film focuses on Ben (Fifer), a bisexual who indulges in random one-night stands with both men and women. One day, he meets the closeted Sam (Sheldon D. Brown) and the pair embark on an interracial relationship while confronting their own personal demons.

When we first meet Ben, he comes across as a lost soul as he drifts from one tryst to another while avoiding long-term commitment. His use of comedy as a defence mechanism barely hides his inner trauma and prevents him from being honest. Occasional broadcasts about convicted paedophile Jerry Sandusky throughout Cicada offer additional complexity, hinting at Ben’s silence about his own past. It is not until Sam comes into his life when he realises that he needs to be with someone.

Sam, on the other hand, fears victimisation. Besides being a gay African-American, his fears and an earlier incident that saw him being shot prevent him from being open about his sexuality. Although Ben and Sam’s respective experiences may deter them from long-term relationships, they create a tender solace that helps to slowly heal old wounds.

While Brown and Fifer offer heartbreaking performances, the latter’s direction allows the relationship to develop gradually. In addition, their screenplay beautifully reflects the protagonists’ reluctance and the honesty of their respective cathartic process.

As a result, Cicada offers a candid queer love story with two engaging leads. Despite its occasionally slow pace, its bravery in exploring sensitive issues and LGBTQ identity will speak to modern audiences.