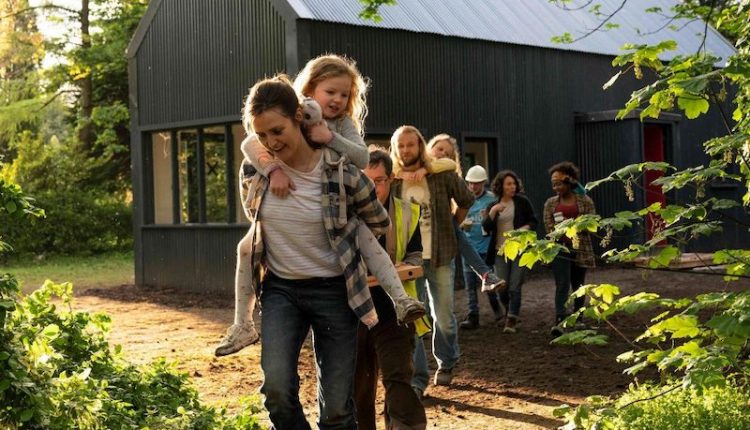 Best known for her work on Mamma Mia! and The Iron Lady, the latest film British filmmaker Phyllida Lloyd sees her collaborate with Irish actress Clare Dunne. Set in Dublin, Herself follows Sharon (Dunne), who struggles with two young daughters after escaping her abusive partner Gary (Ian Floyd Anderson). Unable to secure council housing, she decides to build a house and in doing so, starts to rebuild her life.

At first glance, Herself comes across as a typical drama. There is an endearing protagonist trying to make a life for her daughters. Facing an impossible situation, she and a group of kind-hearted strangers take it upon themselves to help her overcome these challenges. But this is more to Herself than this conventional narrative of self-discovery.

Through Sharon’s challenging journey, Herself offers a subtle but lingering focus on the ramifications of abusive relationships. Dunne’s strong screenplay emphasises the stark reality regarding the lack of authority support, as well as Sharon’s trauma. Working two jobs while suffering from the psychological effects of her abuse, her desperation in supporting and protecting her daughters leads her to an ambitious house build. While she struggles to cope amid haunting flashbacks, this not only fuels her frustration but has a knock-on effect on her children, especially her youngest daughter Molly.

In addition, Herself also explores the significance of the mother-daughter relationship. Despite her various challenges, Sharon continues to prioritise her daughters’ wellbeing and honour the custody relationship with Gary. Her determined demeanour also gains the support of her wily employer Peggy (Harriet Walter), whose generosity and kindness towards Sharon reinforces the film’s uplifting nature.

With Dunne’s expressive performance as Sharon enhancing a typical kitchen sink drama into an engrossing feature. Thanks to Lloyd’s sensitive direction and Dunne’s screenplay, Herself doesn’t dwell on the negatives – it instead focuses on the strength of the human spirit, creating an emotional journey fuelled by heart and optimism.