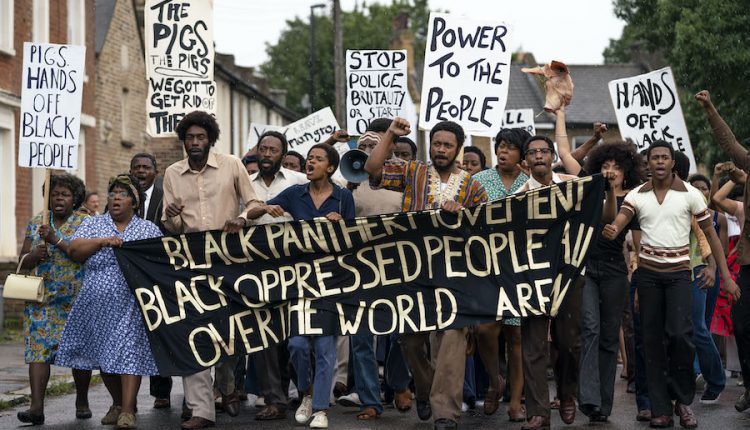 Mangrove focuses on the eponymous Notting Hill restaurant, which quickly becomes a hub for local residents and a target of police harassment. The ongoing brutality leads to a local protest in 1970, resulting in the wrongful arrests of nine people. Known as the ‘Mangrove Nine’, the group comprised Mangrove owner Frank Crichlow (Parkes) and activists Altheia Jones-LeCointe (Wright) and Darcus Howe (Kirby). Charged with incitement to riot and affray, the trial begins to investigate the depth of police racism and the groundbreaking actions of the ‘Mangrove Nine‘.

From the outset, Crichlow comes across as a man that just wants to run a restaurant. But the ongoing police troubles, led by sadistic constable Pulley (Sam Spruell), fuels his anger in being unable to earn a living. This unwanted attention also inspires activists Jones-LeCointe and Howe to speak out, highlighting that there is more than politics at play.

Although the institutionalised racism by police is not surprising, we are reminded of the sad truth that there is no reason for this behaviour. Pulley firmly paints himself as Mangrove‘s antagonist by inflicting his own form of baseless justice against the community. It ultimately comes across as senseless violence that emphasises the need for justice among the West Indian community. This slowly brews, coming to a head when the Mangrove Nine go to court. Even from the biased jury selection, the film’s collaborative screenplay and beautifully executed scenes highlight the tension and underlying racism within the legal system, so audiences end up yearning for unbiased justice.

Parkes, Wright and Kirby each deliver intense performances that allow their characters to shine amid the face of adversity. Behind the camera, McQueen offers a clear vision in the 1960’s London. While he vividly captures the eclectic buzz of Notting Hill and tense courtroom scenes, he also depicts police brutality with unflinching honesty, effectively instilling an unsettling fear where even homes don’t feel safe.

During a time when Black Lives Matter is more important than ever, there has never been a film more timely than Steve McQueen’s compelling drama. With an array of powerful performances driving the story, Mangrove is as educational as it is essential.