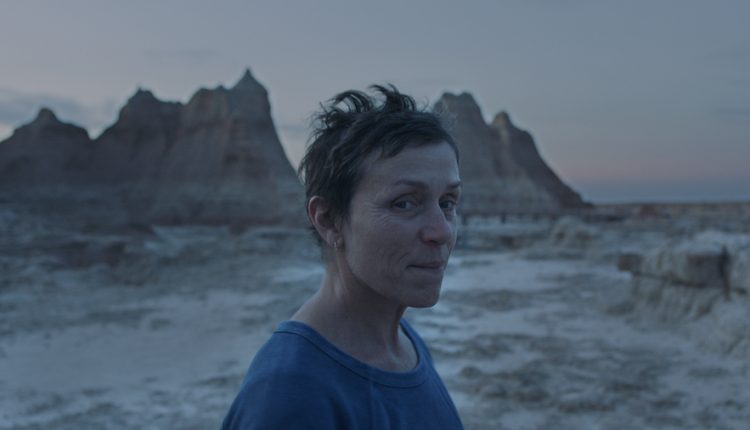 As a notable winner at this year’s Venice and Toronto Film Festivals, Chloé Zhao’s Nomadland is one of this year’s highly anticipated films. Based on a 2017 non-fiction book by Jessica Bruder, the film stars Frances McDormand as Fern, a woman who leaves her rural town for a life on the road.

Since her acclaimed 2017 film The Rider, Zhao has been on a roll. Not only is Nomadland already touted for success at the 2021 Academy Awards, but she is to direct the planned Marvel film Eternals. In addition, McDormand is hoping to score her fifth Oscar nomination following her 2018 win for Three Billboards Outside Ebbing, Missouri. With a winning formula at hand, does Nomadland deliver?

When we first see Fern, she is already living the nomad (aka houseless, not homeless) life. Her town of Empire has practically become non-existent which a mine closure leaves its habitants with no work or homes. Christened ‘Vanguard’, her van becomes her sanctuary as she aimlessly travels while surviving on the occasional job.

Although it may come across as a drastic change, Nomadland features a popular lifestyle for older Americans. With more people wishing to escape the 9-to-5 life and financial pressures, the film highlights what blue-collar workers have had to endure with little reward. It shows how communities thrive via mutual support and a shared sense of resilience. Therefore, nomadism presents itself as an economical lifestyle that offers a sense of freedom with no real commitments.

However, through Fern’s eyes, nomadism also isolates her from civilisation. Her discomfort at being in a house with strangers is apparent, eventually causing her to criticise American real estate at an awkward family barbeque. Instead, she clings to memories of her family and late husband Beau that ultimately stop her from settling down. This also reinforces her loneliness while displaying a heartbreaking vulnerability.

The only real relationships Fern has are with other nomads. From workmate Linda May to the eccentric Swankie, they provide her with companionship and personal insight into nomadism. Despite their fleeting presence, their time with her offers a comforting reassurance that keeps her on the road.

Once again, McDormand offers a strong performance as Nomadland‘s shining star. Displaying sadness, melancholy and occasional moments of joy, she shows a versatility that is a far cry from the dry quirkiness seen in Three Billboards…and Fargo.

While Joshua James Richards’ beautiful cinematography and Ludovico Einaudi’s score provide a canvas for Zhao to build the narrative, she carefully captures America’s desolate wilderness. Using wide angles and slow tracking shots, she delicately visualises the harshness of nomadism and the freedom that feeds Fern’s travels. The result is a feast for the eyes that touches the soul.