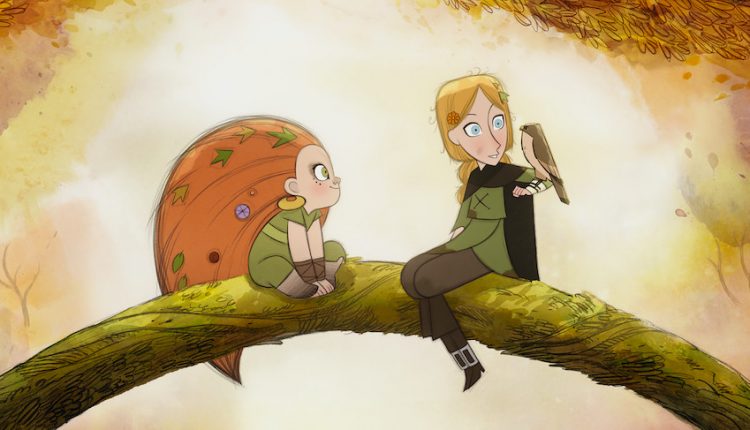 Following its previous features Song of the Sea and The Breadwinner, Irish animation studio Cartoon Saloon returns to the annual BFI London Film Festival with its fourth film, Wolfwalkers.

The film focuses on a young English girl called Robyn (Honor Kneafsey), who lives in Ireland with father Bill (Sean Bean). Going against his wishes, she escapes the walled city to aid Bill hunt wolves. While exploring the nearby woods, Robyn befriends young Wolkwalker Mebh (Eva Whittaker), who can turn into and control wolves. As they try and locate Mebh’s missing mother, Robyn discovers that Bill’s mission to rid the city of wolves may threaten more than her friendship with Medh.

First of all, Wolfwalkers has a familiarity that resonates with animated films such as Brave and How to Train Your Dragon. Specifically, it follows the classic trope of neglected children whose parents ignore their fantastical yet honest protests against misunderstood creatures. In this instance, it is the sheltered Robyn, who wishes to hunt wolves alongside her misguided father. However, she quickly succumbs to her naivety and inexperience, causing her to lose Bill’s trust and her freedom.

While Robyn feels like an all-too-familiar character, Wolfwalkers offers an anchor in the form of the cheeky Mebh. Despite their differences, their friendship bridges their respective worlds that offer two clear perspectives of the same war. This offers a narrational balance, as well as reinforces their connection as two seemingly abandoned girls wanting to escape from their respective ‘cages’.

As like Cartoon Saloon’s previous films, the visuals of Wolfwalkers are beyond beautiful. The combination of chaotic pencil strokes and the clever use of colour separates the vibrant forest and imposing city, creating a stunning visual adventure. Collins’ screenplay blends comedy and heartfelt dialogue with Kneafsey and Whittaker exuding the innocence of their respective characters.

Overall, Wolfwalkers is another wonderful addition to Cartoon Saloon’s filmography. With gorgeous animation and an endearing friendship at its heart, it is one of the most beautiful films this year.

Wolfwalkers opens in UK cinemas from Monday 26th October and is coming to Apple tv+ on 11th December.