Oh boy, oh boy, oh boy. When I was a teenager, License To Drive was one of the BEST FILMS EVER. I’ll explain why. It starred Corey Haim and Corey Feldman. It had the beautiful Heather Graham in it. It was about teenagers going on a wild night out.

I’m sorry, were you expecting any more? That’s all I needed to be kept happy, so happy that I watched License To Drive almost every day when I first bought an ex-rental VHS copy of the thing. It was also very funny. At least, that’s what I thought a few decades ago. 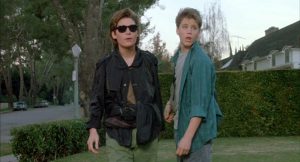 Watching the movie now is a very different affair. I no longer view the inclusion of Feldman and Haim as some double seal of awesomeness, I now know that Heather Graham would just get more and more beautiful with age (somewhere in her attic is a portrait that must look like Gollum by now) and I’m not interested in teenagers having wild nights out. In fact, if I even hear any teenagers having a fairly good time in my street after ten o’clock at night I get a bit grumpy and wish harm upon them. Thankfully, the film is still quite funny. Not as hilarious as I used to find it, but intermittently amusing enough to make it a painless viewing experience.

Haim plays Les Anderson, a young man who wants nothing more than to pass his driving test. When things don’t go according to plan, Les ends up grounded just as he should be celebrating. Of course, being grounded is easier to bear when you don’t have a gorgeous girl (Graham) waiting for a date or a persistent friend (Feldman) who wants to be driven to one or two hot spots. With his grandfather’s Cadillac parked in the garage, Les makes the decision, almost inevitably, to sneak out and have a good time. If he keeps the car in pristine condition then maybe he can commit the perfect crime.

The main problem that License To Drive has, when viewed nowadays by adults, is that it peaks too soon. The opening dream sequence, showing Les literally restrained in a school bus, is a great opener and the day of the driving test features some great moments, particularly any scenes that involve James Avery as a driving instructor who judges drivers by whether or not they make him spill his coffee over himself. Once it passes that sequence, however, it becomes less amusing, and even slightly irritating at times. 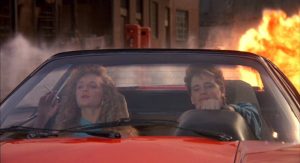 There are still bright spots, such as the performances from Carol Kane and Richard Masur as Haim’s parents. Masur’s reactions, in particular, are always hilarious, and he almost steals the whole movie. Almost. Haim and Feldman may seem a bit more annoying to me than they did back when I was a teenager, but they still have decent screen presence. 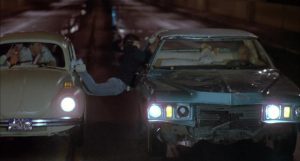 The script by Neil Tolkin coasts along, and the direction from Greg Beeman matches it. As long as you know what before the movie starts up then you won’t end up too disappointed. I would still watch this again, and I would still occasionally chuckle, but it is, ironically, a much more pedestrian movie than my memory would have me believe.

The Extraordinary Adventures of Adèle Blanc-Sec (2010)