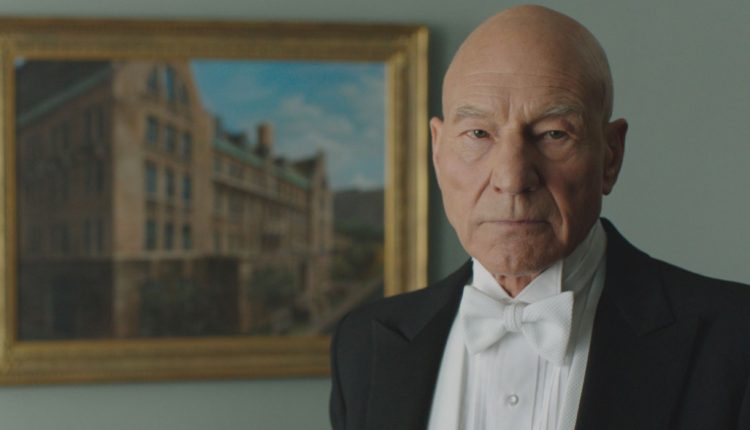 The pandemic has meant that films which belong in the cinema have reductively been banished to TV. There are though some movies of a small scale which are effective regardless of the size of screen upon which they are shown. Such a piece is the moving and intimate Life With Music.

The film stars Patrick Stewart as Henry Cole, a classical pianist who returns to performing after a long absence following the death of his wife. Crippling stage fright however results in an anxiety attack during a concert. That evening, he meets Helen Morrison (Katie Holmes), a writer for The New Yorker, refusing her request for an interview. A pianist herself and a fan, she longs to pen the definitive piece about him. He relents however when she saves the day by joining him in playing after he suffers another setback at another event. As their relationship develops he seeks to find the strength to face the live stage and his personal demons with her support and inspiration.

Claude Lalonde makes an impressive directing debut with this absorbing drama which has more than a little of the sense of Scandinavian cinema. Subtle and thought provoking, it gradually works its spell with a deft and intelligent script by Louis Godbout. This is a leisurely but appropriately paced movie of visual beauty. It understands when words don’t always best serve the narrative whilst at the same time offering a ravishing but unobtrusive soundtrack made up of classical music.

Patrick Stewart is magnificent as the emotionally frail rather than emotionally unavailable Henry, often holding the screen on his own for long stretches. It’s a studied, quiet performance revealing a damaged soul with delicacy. Holmes is arresting (although very twin set and pearls) as his compassionate admirer and narrator of the story. The relationship between Helen and Henry is touchingly played by her and Stewart, the two achieving an on screen chemistry which is vital to the film’s success. Giancarlo Esposito (Breaking Bad) is a welcome presence as Henry’s understanding agent and friend.

Life With Music resonates as both a revealing insight into the fragile life of an artist and as a tale of personal and professional reinvigoration.

Life With Music is currently available for digital download from most providers.