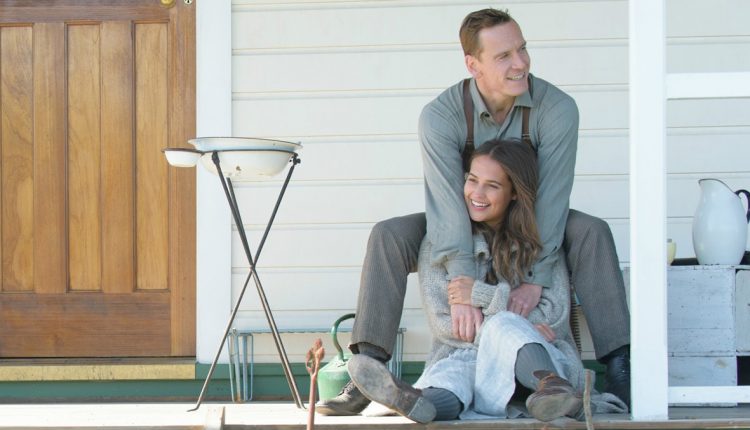 I’m wondering when it’s going to dawn on somebody that the touted new Swedish-born star Alicia Vikander has terrible diction. She’s mumbling and whispering again in the emotionally overwrought The Light Between Islands, in which Tom (Michael Fassbender) is a shell-shocked World War I vet who volunteers to take over a remote Australian lighthouse, and she is the pretty local daughter of Tom’s employer who miraculously insists on marrying him so she can join him on his rocky and solitary retreat. There is a jolly wedding on the mainland, the honeymoon is at the lighthouse, sex the first time is great. You just know life is going to go way downhill from there.

Isabel (Alicia) can’t have a baby, you see. She drags herself to the top of the lighthouse during a raging storm for her first miscarriage – a sequence typical of the level of heightened drama. By the time the second wooden cross has gone up over the corpse of another lost baby, Isabel has grown desperate. Till they spy a tiny dinghy floating just off the rocky shore. Both run down to it and find – a baby girl! And it’s alive, but the thin blond man lying beside her, who turns out to be her father, is dead. The stolid, almost mute Tom wants to report this at once, but Isabel insists they just take care of the baby for a few days, till it recovers from the ordeal at sea. Well, you can guess where that’s going. Before long Isabel has emotionally conned Tom into hiding the man’s corpse and pretending that the child is hers, arrived a bit early. They call her Lucy.

Isabel is all joyful, raising Lucy as her own. Tom is basically a doormat. But he is also a man with a strong sense of duty, and this is going to lead to conflict. Besides, local law enforcement hasn’t all that much to do. Isabel’s joy has a creepy feel about it, and can’t last. From here on, everything is ominous.

Unfortunately Lucy’s mother, Hannah (Rachel Weisz), widow of the lost man, is living in town on the mainland, and happens to belong to a wealthy local family. In a couple of years Tom and Isabel realise this. Lucy’s original name was Grace. That special little silver rattle Tom recovered from the dinghy – you knew he shouldn’t do that. It’s going to be a key plot device!

Leah Greenblatt of Entertainment Weekly got it exactly right when she called this movie “feverishly earnest and more than a little manipulative,” and is equally correct when she ends that sentence “but it’s also possibly the prettiest two hours of emotional ­masochism so far this year.” Well, emotional masochism is manipulative, isn’t it? But the prettiness is courtesy of director-adapter (of ML Stedman’s first novel) Derek Cianfrance, and his tech support. A remote lighthouse is a great place to set a story in the key of overwhelming. The surging music by prolific movie composer Alexandre Desplat never, ever lets up – when you can hear it over the roar of waves and pouring down of rain. As if Fassbinder’s murmurs and Vikander’s mumbles needed anything to make them more inaudible. When a bearded minor character arrived from the mainland to deliver some plot development, I was astonished at the clarity of his diction. It was possible for some people to be heard in this movie. Rachel Weisz was clear.

Everyone is terribly noble in this tearjerker, even, reluctantly, the duplicitous and selfish Isabel, though if it’s impossible ever to like her, or the zombielike, imploding Tom. What with the sadness, the neediness, the goodness, and the silent suffering, augmented by the gorgeous if ultimately generic scenery, this is the prettiest Hallmark card you’ll ever learn to hate.

As for Derek Cianfrance, I’d not want to typecast him, since of his 14 directorial credits I’ve seen only a few. The gimmicky structure of his 2010 Blue Valentine deeply annoyed me, but I had a lot of time for the memorable performances of Michelle Williams and Ryan Gosling in the leads. Gosling was back again, with the very talented Dane DeHaan, for Cianfrance’s overambitious but absorbing The Place Beyond the Pines. Considering that he’s American, I’m impressed at how well he stages the busy, well-populated scenes of early twentieth-century Western Australia in this new film. He’s clearly talented, and he knows how to lure exceptional performers on board, as attested by the presence this time of Fassbinder and Weisz, if not that of the more problematic Vikander (who as a result of their on-set meeting is now Fassbender’s real-life wife). But he just can’t quite be trusted in his choice of projects. Or titles: although he just got this one from the novel. This is more high kitsch than art, and not up to those two previous films.