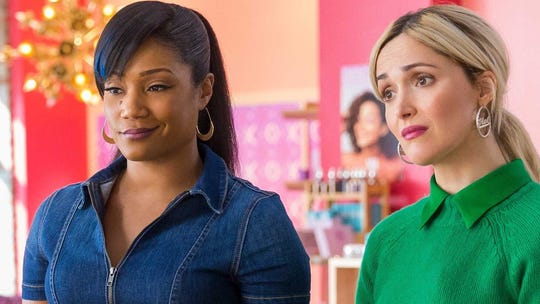 The woefully pedestrian female workplace comedy Like a Boss wants to employ the scattered gags as its frothy foundation. Unfortunately, this dismissive hiccup of hilarity is bombarded by a flat and flimsy premise deserving of an immediate pink slip. Comediennes Tiffany Haddish and Rose Byrne (not to mention an assembly of colorful supporting players) headline this silly and strained estrogen endeavor that labors within its paper thin pomposity. This is yet another generic outing for Haddish failing to recapture the Girls Trip whimsy that launched her box office brand a while back.

Director Miguel Arteta (“Cedar Rapids”, “The Good Girl”) is usually a reliable source when it comes to injecting his comedies with some offbeat, meaty conviction. However, Arteta and screenwriters Sam Pitman and Adam Cole Kelly concoct a lazy-minded, beauty business bust that pits its mismatched leading ladies in a dormant dilemma of cosmetics craziness. Both Haddish and Byrne try to rise to the wacky energy of the transparent script but the monotonous Like a Boss drags out its cockeyed comedic conflict with all the originality and imagination of cherry-colored lip gloss.

As best buddies since childhood, the salt-and-pepper pairing of Mel (Byrne) and Mia (Haddish) has made their tight friendship morph into a partnership they have developed with their competitive cosmetics company. This feminine odd couple oversee their beauty business with a different outlook based on their skill set. Mel is the brains of the operation while Mia is the creative force that gives their brand its distinction. Despite being enterprising as they face major challenges keeping their cosmetics career afloat something of a harsh reality sets in…their Mel and Mia cosmetics company is backlogged in profits as the nagging debts are becoming very overwhelming. Could this spell trouble in the land of friendliness and finances for the harried businesswomen?

Enter Oviedo beauty industry titan Claire Luna (Oscar nominee Selma Hayek). Claire is in the position to rescue both Mel and Mia from their economic misery by offering to buy out their struggling cosmetics company. Claire had been monitoring the progress of Mel and Mia cosmetic company feeble sales online and it was not a pretty sight for the dynamic duo to acknowledge. Although Claire is providing the safety net for the troubled tandem to seek relief from their sinking business the question remains: how will Claire’s financial interference with the collapsing company affect Mel’s and Mia’s camaraderie with one another?

Indeed, Like a Boss wants to embrace the vibes of female empowerment as it dips its ticklish toes in the waters of a nutty showcase that simply lingers in nonsensical fashion. Given the right kind of solid material Haddish and Byrne can be engaging if the comedic cylinders are on point. Instead, this fruitless farce about beauty products and female bonding needs a face-lift in terms of its needlessly giddy-minded leanings. The supporting cast of participants–particularly the aforementioned Sayek along with the likes of Jennifer Coolidge and Pose Emmy-winner Billy Porter–should not be wasted in a numbing comedy with no particular payoff. The manufactured raunchy humor is simply trivial and without merit in its merry-induced messiness.

For Arteta, Like a Boss feels like a misstep for the filmmaker whose previous family fare ditties such as Alexander and the Terrible seem remarkably superior and craftier than the hurried hokum as evidenced in Boss. Sadly, Arteta’s clumsy comedy awkwardly borrows from other better established movies that range from The Devil Wears Prada to any chick flick genre of your choosing. No doubt Arteta’s narrative boasts a talented cast but the rote ramblings situated in Like a Boss belong in the unemployment line.