For a film that is essentially a guy driving in a car for 83 minutes, Locke is surprisingly mesmerising. Tom Hardy gives a great performance as the only visible cast member Ivan Locke, who, whilst on a journey down the M1 to London, listens to his life unravel. As a site manager, he is clearly more in love with, and concerned about, concrete than his wife, marriage and affair. He truly believes he’s doing the right thing by driving to London to be at the birth of his illegitimate child instead of watching a football match with his two excited sons and wife or on site of the largest “pour” in history. Through an endless stream of phone calls, we are invited to listen and watch as his life unravels along with himself. 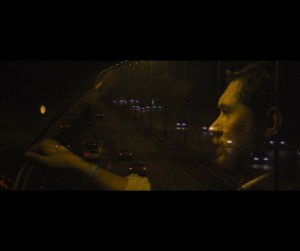 Despite the dubious Welsh accent, Tom Hardy does a great job of holding this film together. If his performance had been rubbish, the film would have failed even with Olivia Colman as one of the voices on the phone. His demeanor changes subtly over the course of the film from a man who truly believes he is doing the right thing to a man realising his justifications are getting him nowhere and he might actually end up with nothing. At one point, towards the end of the film, he says “I started this journey with a wife and a job. Now I have nothing.” It’s the only point during the film he comes face to face with the consequences of his actions. Otherwise, he spends his time justifying himself to himself and his father who is no longer around.

There’s only so much you can do with a film whose only set is the inside of a car, but cinematographer Haris Zambarloukos does a great job of making Locke visually interesting. Switching between shots of Ivan driving and talking to his view out of the car and of the car itself, and making use of reflections and mirrors, Haris successfully makes interesting what would otherwise have been incredibly dull to watch. Between them, Haris and Tom Hardy ensure the film remains captivating even through the end credits. 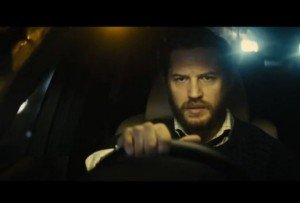 All in all, Locke is a very interesting idea executed into a very interesting film. Shot over eight days and with a score that fits the film perfectly, this is definitely worth your time. It might not seem feasible that someone would receive that many phone calls in that amount of time, but that’s an issue that has to be overlooked because otherwise the film really is just someone driving down the godawful M1. This is a real winner for British cinema, and one of the more original ideas to come out of LFF.