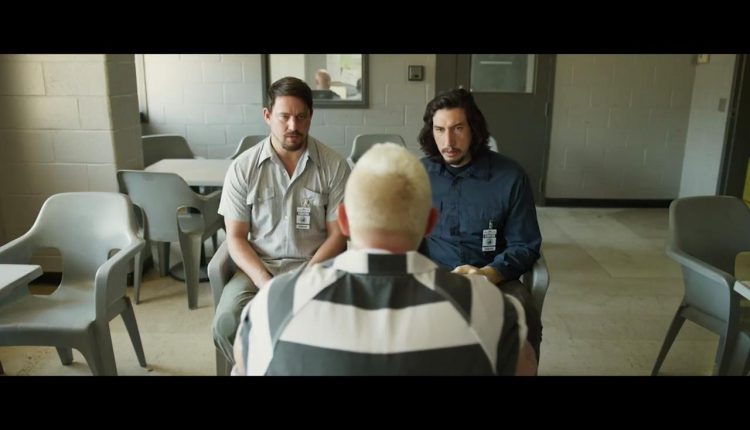 In 2013, Steven Soderbergh famously announced his retirement from feature filmmaking.  While promoting Side Effects, his announcement ended three years of speculation and reflected his dissatisfaction regarding the Hollywood filmmaking industry. Four years later, he is returning to the director’s chair to create what he dubs as the ‘anti-glam version of an Ocean‘s movie’.

Similar to his previous heist films Out of Sight and the Ocean’s trilogy, Soderbergh has a knack for creating charming criminals. In this case, if Danny Ocean had an extended family, the Logans would be his distant cousins. Mismatched siblings Jimmy (Tatum) and one-armed Clyde (Driver) share an endearing chemistry and present themselves as probably the most unsuspecting pair of criminals in West Virginia. Craig, however, is unexpectedly hilarious as incarcerated psycho Joe Bang, whose cool blue eyes and shocking platinum blonde hair feel so out of character for an actor who has been associated with one major role for over ten years.

Modern heist films are portrayed as a military operation – highly coordinated, incredibly organised and complemented with an array of high-tech gadgets. Logan Lucky, on the other hand, is extremely low-key as screenwriter Blunt goes back to basics with the heist, keeping it simple and setting it amid a haze of American culture while managing to deliver little touches of genius along the way.

However, the action leaves little leeway for subplots or characters to develop. Katherine Waterston and Sebastian Stan are pushed out of the limelight, while Agent Grayson (Hilary Swank), Jimmy’s ex Bobbi Jo (Katie Holmes) and arrogant racing driver Max Chilblain (Seth MacFarlane) barely have a chance to make an impression. Collectively, they come across as underused supporting characters that are there to tie up any loose ends.

After five years away, Soderbergh proves that his direction remains as cool and smooth as always. Like the heist itself, he keeps the action running like clockwork and effectively balances it with touches of comedy. Along with the amusing characters and straightforward plot, Logan Lucky is pure entertainment – welcome back, Mr Soderbergh.
Logan Lucky is out in UK cinemas on 25 August 2017.