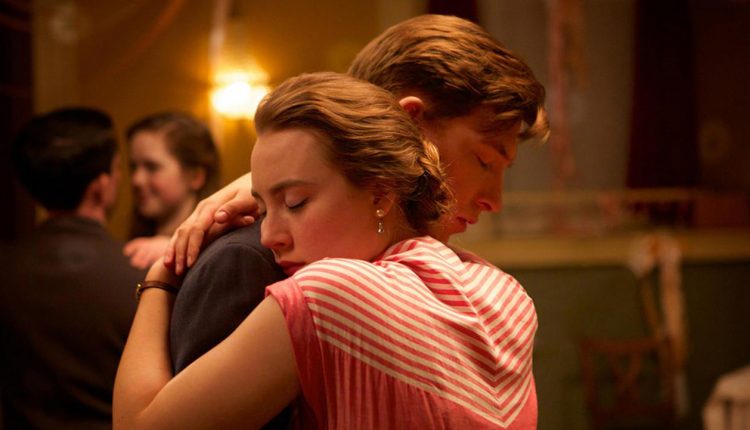 It has been eight years since she earned an Academy Award nomination at the age of 12.  More than ten feature films later, Saoirse Ronan looks set to receive multiple nods for her performance in the latest film by Intermission director John Crowley, an adaptation of Colm Tóibín’s 2009 novel.

Brooklyn stars Ronan playing Ellis, a young Irish woman who emigrates to the US.  After initial homesickness, she finds her feet in Brooklyn, as well as romance with young Italian-American Tony (Emory Cohen).  However, it is not long before her new life takes a tragic turn, forcing her to return to Ireland.  As she is reminded of home, Ellis has to choose between the life she missed and the one she has grown to love.

Brooklyn is more than a romantic story, it is also a coming-of-age tale.  As the audience is introduced to Ellis, she is a shy young woman who is intimidated by her friends and her employer.  But as the film progresses, her confidence grows and begins to experience new things.  The theme of leaving home for the first time and creating a life for yourself is a relatable and personal one, but in Brooklyn, it presents Ellis with an interesting dilemma; choosing an easy route or one that challenges you.

In this instance, it is easy to get caught up in Ellis’ life as she embarks to Brooklyn.  Ranging from her initial nerves and homesickness, to her thrill of meeting new people, taking on night classes and even trying Italian food, there are moments in the film that pluck the heartstrings of the most cynical of viewers.

Screenwriter Nick Hornby’s screenplay expresses Ellis’ insecurities and the trepidation of making it on her own, while director Peter Crowley beautifully captures the film using sun-kissed, glamorous shots of Brooklyn, as well as fresh, untouched greenery of Ireland.

For a child actress, Ronan has accomplished a lot since her stunning performance in Atonement but her turn in Brooklyn is arguably her best yet.  Her portrayal as Ellis is incredibly expressive and emotional, growing from a timid young girl into a vibrant character.  Cohen is charming as the surprisingly well-mannered Tony, whereas Ellis’ Irish love interest Jim Farrell, played by Domnhall Gleeson, feels underused and unchallenged in his short role.  Veterans Jim Broadbent and Julie Walters make the most of their short screen time to make an impact as the encouraging Father Flood and the sharp-tongued yet entertaining Madge Kehoe.

Overall, Brooklyn is sublime viewing; beautiful to look at and lovely to watch, with Ronan presenting her most mature role to date.

Brooklyn is being shown on 13th and 14th October and will be out in UK cinemas on 6th November.