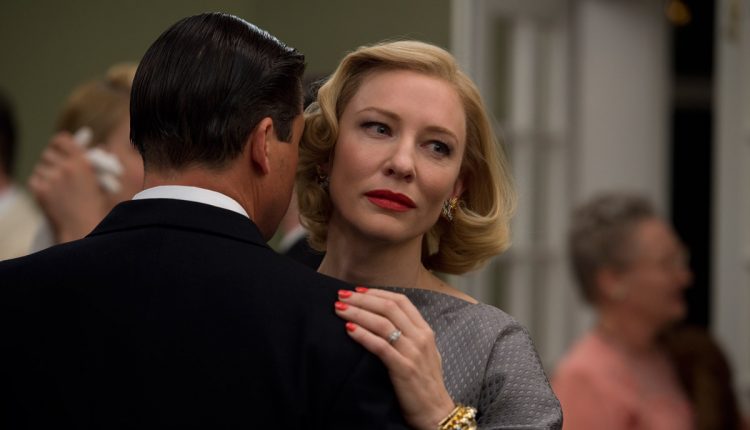 This year, Australian actress Cate Blanchett is the recipient of the BFI Fellowship Award, one of the highest honours given by the agency. In addition, her latest film will be holding its UK premiere at the festival, and is sure to give her a seventh Academy Award nomination of her career.

The style of the film has an immediate impact.  Gone is the glamorous, cliche and almost bubblegum style of the 1950s; instead, director Todd Haynes and cinematographer Edward Lachman captures New York in a gritty way, accompanied with Carter Burwell’s gentle score. Even the supposed cheery atmosphere of a department store in the run-up to Christmas doesn’t lift the dullness of the picture, but evokes a sense of realism, showing the audience that this tale is not all smiles and colour.

The theme of hiding runs throughout the film; whether it’s denying true feelings or acting in a secretive way, there are definitely layers to Carol.  Building up on the complexities of the relationship between Therese and Carol, not to mention the other relationships in their respective lives, the story conveys more than a romantic and emotional struggle.  It also presents a moral dilemma that is continually tested by the characters as the film progresses.

Adapted by Patricia Highsmith’s novel The Price of Salt, screenwriter Phyllis Nagy provides a strong script that is not overly sentimental.  Instead, the dialogue highlights Therese and Carol’s respective weaknesses, while making the use of the underlying theme throughout the film – the characters’ mutual (taboo) attraction; it is implied at the beginning, but never said out loud.

The performances are faultless.  Blanchett is stunning as Carol, whose seductiveness and self-assurance hides her vulnerability to protect custody of her daughter.  Mara is equally endearing as the naive Therese.  Emotionally, she is as equally closed-off as Carol, her restlessness in a one-sided relationship with nice guy Richard (Jake Lacy) is evident but the fact that she has less to lose but more to gain from this relationship.  Kyle Chandler and Sarah Paulson also play wonderfully complex characters.  As Carol’s husband and former lover respectively, they both represent her past, present and potential future and are equally compelling.

Overall, Carol is stunning, compelling and unmissable.  Both Blanchett and Mara deserve nods at the 2016 awards.

Carol is out in UK cinemas on 20th November.