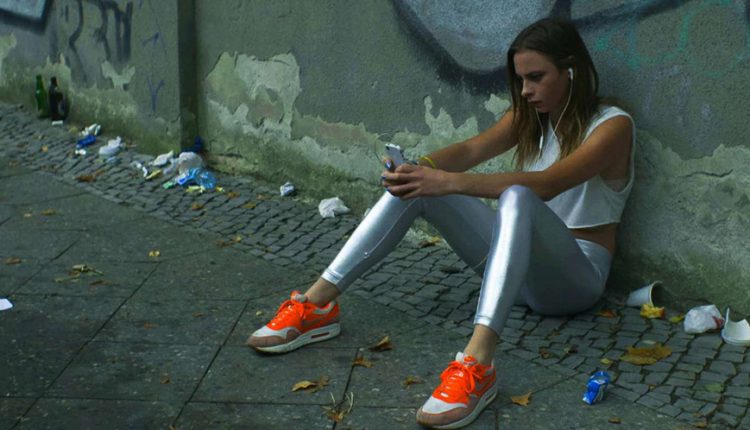 Teen horror films are difficult to get right. Firstly, they need to be authentic to the point of familiarity with their intended audience – not so easy considering many horror films that truly live up to the tag are not suitable for younger teens to see in the first place; and secondly, there is now an entire lexicon of teen horror tropes that are worn and tedious. Given this, the one area where a teen horror film can truly stand out from the rest is in its construction (not merely fiddling chronology and narrative, but in its actual technical creation) and further, how this construction affects what it says and how it says it.

It is in this latter aspect that Der Nachtmahr attempts to give us something new, something shocking, something loud. That it doesn’t work is down to the impossibly high standards the film sets itself in its fantastic trailer, and the fact that those interesting visual and aural aspects of the film only obscure for a brief time the film’s clichéd core.

Der Nachtmahr is directed by AKIZ, a German visual artist bringing to this film an already impressive reputation – his art work has been championed by the likes of Banksy and David Lynch – and is a project that has been in development a very long time, apparently his first attempts at building the “creature” were way back in 2004.
Der Nachtmahr begins with a strobe warning, quite rightly so, and a request to turn up the volume – hints perhaps at this early stage that it’s the superficial we should most aware of.

Tina (played by the waiflike Carolyn Genzkow) is a typical, troubled teenager, struggling through the usual high-school pitfalls of drugs, alcohol, loud music and the attention (or lack thereof) of boys. One night, however, at a particularly loud and abrasive neon-soaked party, we begin to see that she is, in fact, decidedly atypical. During a quick bathroom break in the bushes she gets her first sight of a creature, something growling in the trees that truly terrifies her. She is then shown a particularly graphic video of a girl being hit by a car, just as, in the road, a girl is hit by a car. As the film, annoyingly, rewinds itself, revealing it was not actually Tina that got splatted, that she merely passed out, we begin to suspect that something, from here on in, will be quite odd about her. So far, so potentially Twin Peaks, then.

As the days go by, Tina becomes more and more convinced that the homunculus from the bushes is actually with her, in her room, benevolently (or so it seems) eating and appealing to her attentions. At this point the film does the exact opposite of the genre norm and presents us the monster in all its tiny glory, under harsh lights, in extreme close-up. It’s a neat conceit at first, but as Tina’s interactions with the homunculus become more protracted, and indeed so does its screen time, so the flaws in its construction begin to show until it becomes distracting. Quite often there is a reason monsters are left in the shadows.

By this point, the two worlds that Tina inhabits are very clear to us – her school life, sound-tracked by coruscating industrial music (fans of Alec Empire, who did the score, will know what to expect) and filmed in jarring, almost abstract Gaspar Noe-style neons and fast cuts, in which she is free to express herself through her clothing and the trappings of industrial club-culture is juxtaposed with her home life, shot quietly, calmly, in which she is dressed almost all the time in a white vest and tiny shorts, moving about a claustrophobic house under the worried gaze of her parents.

When we realise that the homunculus is visible not only to Tina but her parents and possibly others as well, these two worlds collide and begin to overlap and the sense of confusion and disorientation that Tina feels is splashed over the audience too. It is at about this point that the reason for the homunculus’ appearance becomes clear.
Or maybe it doesn’t. Perhaps we should just accept that it’s there, actually there, and is not some convoluted but very ordinary metaphor for pregnancy or any other biological malaise that affects teenagers. The film makes valid points for both interpretations, though whichever conclusion you choose will invariably lead to the same conclusion in the end. We’ve seen this before, in countless horror films (there are shades of Lynch and early Cronenberg in the horror) and countless teen films (at one point Der Nachtmahr looked set to become another Kids or Christiane F.) and so on. By the time Kim Gordon (of Sonic Youth, who contributes to the soundtrack) turns up as the understanding poetry teacher, it’s too late and the damage is done. This leads to the bizarre, and requisite, public conclusion, one which steadfastly refuses to answer any questions and which leads to one of the dafter scenes in the film.

So in the end we are left with a film about teenagers and disorientation and the primal fear of being photographed while urinating. It is also a stylish film, certainly, and very definitely a loud one. Possibly even a good one, were AKIZ able to sustain the incredible energy and atmosphere of the first ten minutes. Unfortunately, though, he couldn’t.

Der Nachtmahr screens at the 59th BFI London Film Festival on the 8th and 10th October as part of the Dare strand.